It is believed that, under detailed plans to be announced next week by the pensions minister Steve Webb, the state pension will be reformed to give each pensioner a £140 flat rate per week. With inflation factored in this could become around £155 a week by the time it is introduced in 2015 or 2016.

This new rate would only be available to new pensioners, those currently in receipt of the state pension would continue with current arrangements.

At present the full state pension is £97.65p a week (£156.15p for a couple), but with the credits available this is topped up to a minimum of £132.60p (£202.40p for a couple). Some also benefit from the additional state pension where they are 'rewarded' for paying in more National Insurance Contributions owing to having a higher wage throughout their working lives.

These complicated tiers would eventually be done away with under the new simplified flat rate scheme.

Many would benefit from this change, those on lower earnings throughout their lives for example, or the self-employed as well as the parent that takes time out of the workplace to raise their children. 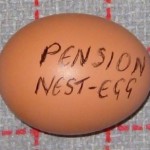 But as always there will be losers such as those on high wages who contribute much more into the pot.

The raising of the pension age into the future will help offset the expense of what looks to be a higher costlier system.

This of course will be thrown into the melting pot along with proposals to merge income tax and National Insurance Contributions, which will have an impact as it may well turn out that the state pension needs to be taxed differently to other income.

Simplification is usually a welcome thing and, in this case it, will help everyone to know exactly what the goalposts are. But, as we all know, it just takes one general election to bring in a new government that wants to make everything 'fairer' and they will then ask 'why are millionaires and those with fat personal and work pensions getting the same as those with none?' And the so it will go on.