New Tunnel To Replace Pipeline Under The Humber

The announcement follows detailed environmental and engineering studies carried out over the last year, together with the comments of local people given during public consultation on a number of options for the replacement pipeline held in December 2012.

"We recognise the importance of the River Humber and have taken great care to listen to local people and consider any potential effects on the environment and communities. A new pipeline in a tunnel beneath the Humber presents the least potential for disruption to local communities and the environment in and around the Humber. It would also cause minimal disruption to shipping and other commercial operations.

"The tunnel option was also the most popular option among members of the public who gave their comments during our public consultation and we look forward to continuing our discussions with local residents and groups as we progress our plans."

Information about the project can be found on the project website at www.nationalgrid.com/riverhumberpipeline. 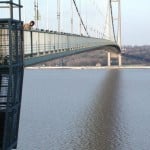 The River Humber pipeline is an important pipeline – connecting an import location for gas at Easington, on the East Yorkshire coast, to the wider network and delivering gas to millions of customers throughout the UK.

Over time, the tidal patterns of the River Humber have eroded the river bed covering the existing pipeline, leading to parts of it becoming exposed. An innovative short-term engineering solution to protect the pipeline by covering exposed areas was put in place in 2010. Because of the importance of the pipeline, National Grid is now looking at the options for constructing a new pipeline as a long-term replacement.

Local residents attended a series of events held by National Grid in December 2012 to give their views on the plans, including a number of possible routes across the river and the two proposed construction techniques.

Events were held at East Halton, Goxhill and Paull and more than 3,000 households were invited. All of the comments received by National Grid were considered, together with detailed environmental and engineering studies, to help determine the preferred route corridor and construction technique.

Prison suicides rise by 69% in a year