The U.S. currently imports more than 80% of the lithium it uses, with the silvery metal winding up in batteries from cell phones to electric cars.

According to a United States Geological Survey publication onÂ lithium, “The only commercially active lithium mine in the United States was a brine operation in Nevada. The mine’s production capacity was expanded in 2012, and a new lithium hydroxide plant opened in North Carolina. Two companies produced a large array of downstream lithium compounds in the United States from domestic or South American lithium carbonate, lithium chloride, and lithium hydroxide. A U.S. recycling company produced a small quantity of lithium carbonate from solutions recovered during the recycling of lithium ion batteries.”

Last year virtually all of the major brine and mineral-based lithium producers increased their prices, which in turn has spurred prospecting. In the U.S. exploration has been largely centred in Nevada, but the growing worldwide market for lithium has also spurred exploration in Argentina, Australia, Bolivia and Canada.

And now, the good news.

University of Wyoming researchers found the lithium while studying the idea of storing carbon dioxide underground in the Rock Springs Uplift, a geologic formation in southwest Wyoming. University of Wyoming Carbon Management Institute director Ron Surdam stated that the lithium wasÂ found in underground brine (Laramie Boomerang – www.laramieboomerang.com/articles/2013/04/26/ap-state-wy/wy_wyoming_lithium.txt).Â Surdam estimated the located deposit at roughly 228,000 tons in a 25-square-mile area. Extrapolating the data, Surdam said as the uplift covered roughly 2,000 square miles, there could be up to 18 million tons of lithium there, worth up to roughly $500 billion at current market prices.

As a yardstick, the lithium reserves at Silver Peak, Nevada, the largest domestic producer of lithium total 118,000 tons in a 20-square-mile area. The University of Wyoming stated that in a best-case scenario, the Rock Springs Uplift’s 18 million tons of potential lithium reserves is equivalent to roughly 720 years of current global lithium production. UW researchers suggest th at the lithium mining could be part of aÂ carbon dioxide sequestrationÂ operation, since the lithium-bearing brine must be pumped to the surface from the underground rock formation to extract the lithium, creating space to store the CO2 in its place. Surdam highlighted the economic advantages to the combined lithium-CO2 storage operation, commenting, "You get paid to put the carbon in the subsurface and that'll pay for the wells to remove the lithium."

Carbon Management Institute senior hydrogeologist Scott Quillinan said, “Due to their high salinity, brines from the CO2 storage reservoirs would have to be pumped to the surface and treated – often an expensive process. Recovering and marketing lithium from the brines would produce significant revenue to offset the cost of brine production, treatment and CO2 storage operations.” 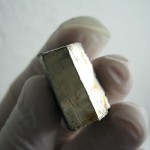 Several fortunate factors converge to make the lithium- CO2 storage reservoir concept more than merely feasible. While lithium production from brines requires sodium carbonate (soda ash), transporting soda ash to lithium production facilities is often a significant expense the Rock Springs Uplift CO2 storage site is located 20-30 miles of the world’s largest industrial soda ash supplies, so costs of soda ash delivery would be minor. While magnesium must be removed from brines before they can be used for lithium recovery, the Rock Springs Uplift reservoirs contain much less magnesium than brines at existing, currently profitable lithium mining operations. While brines must be heated and pressurized before lithium can be extracted, the Rock Springs Uplift brines lie so far underground, they are already at a higher pressure and temperature than brines at existing lithium operations, allowing any potential operators largely eliminate the step, further lessening costs. Finally, the treated water resulting from the recovery process could benefit local communities, agriculture and industry.

It will be interesting to see if any investment entities step up to the plate on this.

Which is the best type of life insurance to cover my family in the event of my death?