Helen Mucciolo has been named executive vice president, principal financial officer, and head of the Bank's Corporate Group. She will also serve on the Bank’s Management Committee. Ms. Mucciolo’s appointment was made by the Bank’s Board of Directors and will be effective August 1, 2015.

As head of the Corporate Group, Ms. Mucciolo will oversee the financial management, business continuity, and real estate and general support functions of the Bank.

William C. Dudley, president and chief executive officer of the New York Fed, said, “Over the years, I have admired Helen’s ability to successfully take on some of the Bank’s biggest challenges. We will benefit from her tremendous experience, skill and commitment to public service.”

Ms. Mucciolo has more than 20 years of experience with the Bank, including most recently within the Financial Services Group, where she has been responsible for the Bank’s cash and custody services.   Prior to that, she worked in the Financial Institutions Supervision Group, where she focused on Resolution and Recovery Planning, and also led the Investment Support Office, which was responsible for overseeing and coordinating all matters related to the portfolio of assets associated with the Bank’s extensions of credit in connection with JPMorgan Chase and Co.’s acquisition of Bear Stearns Companies Inc., and the restructuring of American International Group. 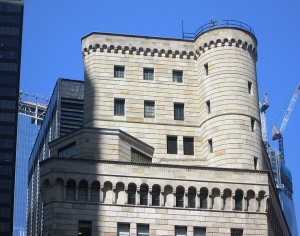 By Beyond My Ken (CC)

She has held several other management positions with the Bank including in the operational risk department, the subcommittee on credit risk management administration office, markets’ accounting and the discount window.

Ms. Mucciolo received a B.S. degree from Syracuse University in finance and accounting and a M.B.A in finance from Pace University. She is also a Chartered Financial Analyst.

Joshua Rosenberg has been named executive vice president, chief risk officer and head of the Risk Group effective July 16, 2015. He also will serve on the Bank’s Management Committee. The appointment was made by the Bank’s Board of Directors.

As head of the Risk Group, Mr. Rosenberg will lead the implementation and enhancement of the Bank’s risk management framework including its approaches to operational, financial and enterprise risk.

William C. Dudley, president and chief executive officer of the New York Fed, said, “Josh has superb knowledge and expertise in designing the tools and methods that underpin many of the Bank’s key risk management programs. We will be relying on him as we continue to move forward on enhancing our risk management practices.”

Prior to joining the Bank, Mr. Rosenberg was an Assistant Professor of Finance at New York University’s Stern School of Business.

Mr. Rosenberg holds a bachelor’s degree in mathematics and religion from Oberlin College and a Ph.D. in economics from the University of California, San Diego.

Groundhog Day again but we shouldn’t get too complacent