Next phase of Help to Buy starts

The second phase of the government's scheme to kick start the housing market has started with banks beginning to come forward with deals for potential homebuyers.

In the first phase, which started in April this year, purchasers of new-build houses could get a 20 percent equity loan from the government as long as they could put 5 percent in as a deposit themselves.

Under this second phase buyers still need to cough up a minimum of 5 percent on a home worth up to £600,000 but the government will guarantee 15 percent of the loan with the lender having to pay a fee for it (wonder who ends up paying for that). This is designed to allow those who can afford mortgage repayments but cannot raise a large enough deposit to buy a house.

So with the government shouldering some of the risk the rates could be more affordable allowing more people to step onto the property ladder. But the cost of the risk has been passed on to the lender and then the customer because of the imposition of a fee for the service, which means that the eventual deal may not be that much cheaper to the borrower than a standard mortgage.

But few lenders (about 30%) have joined the scheme as yet making some wonder that banks may be wary of it, but Danny Alexander, the treasury secretary said on BBC1 news this morning that we should expect more to come forward with mortgage offerings in the next few days and weeks. It makes one wonder why the government rushed this forward without getting a much more robust support from lenders. Was this just a timing issue with the Conservative Party conference last week; or is this a panic led scheme to try and keep the housing market afloat a bit longer?

Many people have argued that pouring more money, government taxpayer money, into the housing market risks the formation of another risky housing bubble. But Danny Alexander dismissed this saying that he didn't see the housing bubble going on that others talked about. The market was starting from a low he said and that house prices had risen by about 0.8 percent over the last year outside London and the SE and 3.3% if you include them.

But a quick look at this graph will show that the mortgage backed purchases as shown by Nationwide and Halifax have risen faster than the overall average house prices over the last year. 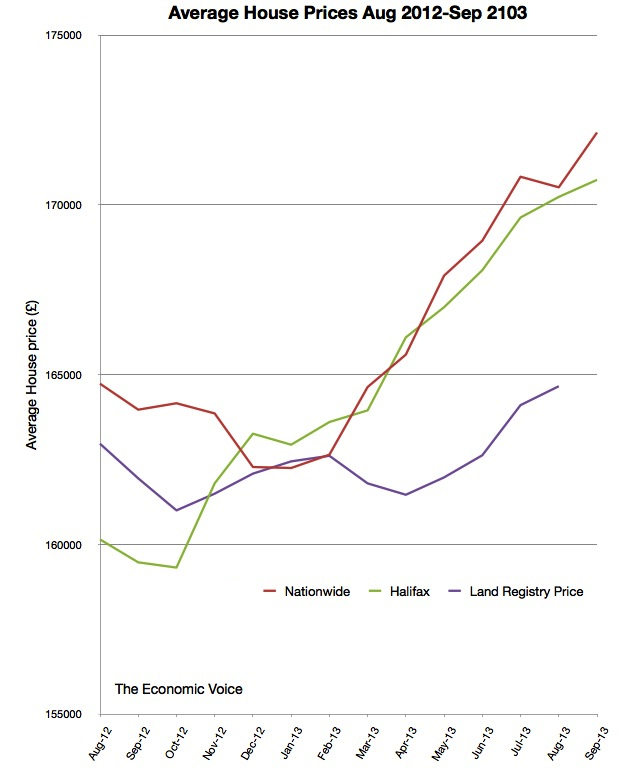 As can be seen, the Land registry average (which includes both mortgage and cash buyers) for England and Wales increased by about 1% between August 2012 and August 2013 (no data available for September 2013 yet).

Compare that to an average of the Nationwide and Halifax average UK house prices, which rose by 4.9% over the same period and by 6% between September 2012 and September 2013.

So, what does it say that the Land Registry index, which excludes Scotland and Northern Ireland (so is more skewed towards the fast rising London prices and includes cash buyers), is going up at a far lower rate than the mortgage backed indices of the Nationwide and Halifax for the whole of the UK?