The Deputy Prime Minister, Nick Clegg, is urging companies to unlock potential growth by offering shares to its employees.

This would create what he calls a ‘John Lewis economy’ emulating that department store group, which is owned by its employees who all receive a share of the profits as a consequence.

And there are possible tax breaks on offer for those companies that adopt such a scheme.

Talking at a City of London Corporation and Centre Forum think tank hosted event at Mansion House he said that "We don't believe our problem is too much capitalism – we think it's that too few people have capital. We need more individuals to have a real stake in their firms. More of a John Lewis economy, if you like. And what many people don't realise about employee ownership is that it is a hugely underused tool in unlocking growth. I don't value employee ownership because I believe it is somehow 'nicer' – a more pleasant alternative to the rest of the corporate world. Those are lazy stereotypes. Firms that have engaged employees, who own a chunk of their company, are just as dynamic, just as savvy, as their competitors. In fact, they often perform better. Lower absenteeism. Less staff turnover. Lower production costs. In general, higher productivity and higher wages. They weathered the economic downturn better than other companies."

The Deputy Pm said that he wanted to get employee ownership, which was the ‘touchstone’ of his party’s thinking, ‘into the bloodstream’ of the UK economy.

“Liberals believe strongly in the virtues of the market. But only if it is a market for the many, not a market for the few. Our economy is in danger of becoming the latter, monopolised by a minority, serving narrow and sectional interests.” He said.

There are though pros and cons. 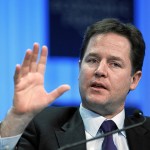 One would therefore expect employee ownership shares to be backed up by some sort of government bail-out procedure akin to the Financial Services Compensation Scheme and the pension protection arrangements.

And don’t expect the tax regime for it to be any less complex and onerous than the ones currently in place for employers.

Nick Clegg’s speech can be read in full at politics.co.uk HERE.