Nick Clegg Accuses UKIP and Tories of being unpatriotic

According to the Deputy PM the UK Independence Party is ‘unpatriotic’ and betraying Britain in wanting to leave the European Union.

He also accused a large part of the Conservative Party of an ‘unpatriotic approach’ to the EU.

The pro-EU establishment, of which the LibDems are a part, are obviously needled by the recent news that businessman Paul Sykes is to pour a substantial amount of money into supporting UKIP’s message to the whole country. With the help of his cash UKIP is hoping to come first in the 2014 European Elections and send shock waves through Westminster as this would effectively be saying that the UK electorate want out of the EU.

According to UKIP leader Nigel, Farage, Liberal Democrat Leader Nick Clegg's attack on UKIP as "unpatriotic" shows that he has been rattled. 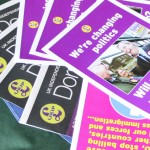 "These ridiculous comments from Mr. Clegg demonstrate just how worried the pro-EU establishment are becoming. The news that Paul Sykes will be supporting the UKIP European Election campaign clearly has them worried and already we're seeing pathetic attacks of this nature.” he said.

"All three old parties want Britain's laws to be made somewhere else, and they are all in favour of opening the doors to Romania and Bulgaria next year. Only UKIP stands up for Britain.

"The British people will have the opportunity to have their voice heard next year. They can either vote to stay in the EU with Clegg, Cameron and Miliband or for UKIP who want Britain to leave."

FX traders left a little bemused by the BOE and ECB