Talking on the BBC Andrew Marr show yesterday Nick Clegg, the LibDem leader and coalition deputy prime minister, said that the more well off pensioners should ‘sacrifice’ their benefits to help address the national debt problem.

“We should be asking millionaire pensioners to perhaps make a little sacrifice on their free TV licence or their free bus passes.” he said.

The Conservatives, who would of course wear the brunt of any public backlash against such a move, are dead set against the idea as would, one supposes, the Labour party.

Despite this the deputy prime minister said that he would continue to push the case.

This of course goes against the whole concept of ‘universal benefits’ where you get them whatever your own personal financial circumstances are. If you claim them that is. How many elderly people have paid in but are too proud to now take it back out?

But these universal benefits such as free bus passes for the over 60s and free TV licences for the over 75s cost millions if not billions a year and some would argue that it is not right that the wealthy should receive them in these economically straitened times.

But let’s cast our minds back a bit. These benefits were promises made by previous governments that if people paid the taxes they were asked to pay they would eventually get the benefits they were promised. 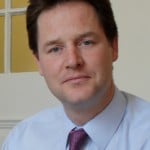 But at every turn we see previous promises backed out of by successive governments. In fact it would be better if governments took a lot less of our money and made far fewer promises, promises that are never kept anyway.

Ask yourself, would the person in the street have paid so much into the system over the decades had they known that a vast amount of it would be gobbled up by bailing out banks?

CBI makes the case for being in a reformed EU