He will also be visiting a Siemens turbine factory and speaking and taking questions at an event to launch the Queen Elizabeth prize for engineering.

after referring to the weather he will say that a 'dark cloud still hangs over Europe' and that Europe's response thus far has been 'woefully fragmented'.

"We have failed on a number of fronts." he will say. "We have tried to give Europe’s problems different labels, tried to keep them separate. But the world just doesn’t work that way. Management of financial risk, fiscal discipline, labour market reform; these are not just different chapters in an economics textbook. They are closely connected problems with consequences for us all.

We have created different classes of country; strong and weak, spenders and savers, Eurozone and non-Eurozone. But these divisions are false. Europe’s economies cannot be prised apart and filed neatly in different boxes; they are too interdependent.

And we the way we take decisions is undermining public confidence. Every few weeks European leaders sit down to yet another crisis summit, where another temporary solution is agreed. The tree is falling, and we are pruning one leaf at a time. It is piecemeal politics; endless tactics with no strategy."

He will then go on to say that just letting countries leave the Eurozone in the belief that it will be better in the long run is misguided. "No rational person interested in the wealth and wellbeing of Europe’s citizens could advocate taking such a risk: not with Greece’s future, or our own" he will say.

But as to solving the problems? He puts forward four things: 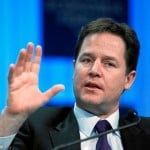 "First, faced with different economies, which suffer shocks in different ways, Europe must either share common debt, or change the way money is transferred. You cannot have a monetary union in which one country saves, exports and invests and another spends, borrows and consumes without some mechanism to make it all add up. So we need new fiscal instruments in the Eurozone, through either Eurobonds or greater transfers between Eurozone members.

Second, the European Central Bank has to act as a real monetary backstop, a lender of last resort. This is critical. Fiscal action across the EU must be supported by responsive monetary policy – with central banks prepared to intervene aggressively to support demand.

Third, we must build a firewall big enough and strong enough to stop the flames from spreading. At the moment, countries are stuck in vicious, periodic uncertainty. Tottering banks are propped up by governments.

Governments then take the hit from bond markets. Lenders then question whether governments can still shore up the banks. And so the pendulum swings back, only this time everyone’s costs have gone up and the taxpayer ends up deeper in the hole. We need to find a sustainable, realistic way of re-capitalising and stabilising banks.

Fourth, we need to get serious about structural reform. The creation of the single market – the largest borderless single market in the world – is an incredible achievement, one that still has the potential to create hundreds of thousands of jobs."

He will then go on to say Europe's problems are the UK's problems and that we need to find a clear path out of this mess or the end result could be the creation of a breeding ground for "…an increase in xenophobia, populism, and extremism".