The decision to specifically visit Crickhowell's premier chocolatiers may have been influenced by the fact that Nick is a fan of the extraordinary quality of the chocolate produced there, which stands as an example of a British business at it's best.

The quaint courtyard setting managed to hold off the rain during Nick's visit which allowed him to talk to other local businessmen and local producers in the courtyard.

Nick's Â stop off was part of his visit to Wales where he visited many places including Fishguard, Swansea and Wrexham.

During his trip around Wales, Clegg used the opportunity to point out the catalogue of errors made by the previous Labour government who'sÂ mishandlingÂ of the economy (and encouraging systemic risk in the banking system) lead to the unpopular and painful cuts. 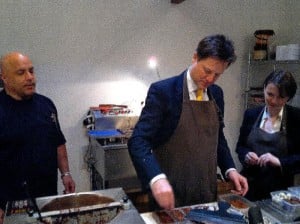 The cuts are onlyÂ relevantÂ in the current economic construct where the public sector is funded by borrowing and the tax take from the private sector.

However if there was a separate currency running alongside the UK PoundÂ specifically aimed as a medium of exchange andÂ exchangeable with the UK pound then the options for public sector funding are increased ending any further cuts and would see an explosion in public sector funding.

ProvidingÂ there Â is no inflationary spillage over toÂ Sterling…… The Economic Voice is working hard to formulate ideas for creating a means to separate the public sector funding from taxation.

If you have any ideas on this then please do not remain silent on the matter.