Nicolas Sarkozy has laid a stark warning to the European community that "never has the risk of disintegration been greater".

Speaking to fellow leaders in Marseille the French President attempted to galvanise support for the talks, which some economists are saying will be the last chance to save the Euro and could lead to a breakup of the Eurozone.

The position of Sarkozy and Merkel and their endgame for these talks is clear; they want their respective countries to forge a new Europe which will be more of a federal Europe with fiscal union….and neither leader wants to see a scrawny little Englishman scupper those talks with his wingeing about outdated notions ofÂ  democracy and self governance by EU member states.

Jose Manuel Barroso, who is the European Commission chief and a high priest of the EU Federal Europe school of thinking spoke in Marseille about the importance of holding onto the single European currency without giving a reason for doing so. Barroso said:

"The entire world is watching. We must do everything"

"It is extremely important that we all together, all the EU, show that the euro is irreversible."

The emerging New World Order to control the masses under a single flag, currency and army has long been debated by conspiracy theorists and previously consigned into the tin foil hat categorisation, but more recently even the most outlandish conspiracy exponents like David Icke and Alex Jones from Infowars.com are gaining a following.

Loath them or love them, Icke and Jones have made accurate predictions about our post 9/11 world, which include the attack on the World Trade Centre, the economic collapse and recent wars.

A little research shows there was not much coincidence in both of these men reaching similar conclusions and making the same predictions……no crystal ball was needed, the leaked intel was apparently there.

OK this might seem like a complete deviation away from the original premise of this article however the New World Order and a Federal Europe are, in the minds of a growing proportion of people, becoming inextricably linked.

So any demand for tighter controls both fiscally and politically are going to send alarm bells ringing in the ears of the casual researcher.

But is there any credence in what the mainstream press will tell you are 'preposterous claims by lunatics'?

Ask yourself this question.

How many former employees and contracted individuals from investment bank Goldman Sachs are involved with formulating monetary policy across the European Union and were democratically elected to the elevated positions which they hold?

Whether David Icke is right about the British Royal family being reptilian is not the point, nor is the validity of claims from Alex Jones about FEMA concentration/detention camps being given the go ahead by Obama.

The point is Icke and Jones (and many others from the conspiracy world) have predicted and documented the direction of future events before they have taken place and they include the financial collapse and both men have documented the corruption endemic in the major investment banks, which do to some extent run the world….or at least dictate policy through financially blackmailing nations. 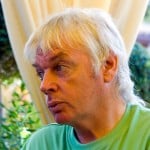 So a simple little thing like saving the Euro by undemocratically removing powers from sovereign states andÂ  the centralisation of power may seem like a trivial thing to many people and most necessary in order to save jobs and prevent us from staring into an economic abyss.

Well believe it or not the world used to run quite well long before the Euro and Eurozone project and the only problem with a breakup will be in trying to appease those who hold sovereign debt as wealth……in other words…the banks and pension schemes.

Pension schemes can be nationalised and money literally printed for a short term period to buffer them beforeÂ  any resale in the future to private investors (yes it is possible to do without trashing your currency).

So Alex Jones, Max Keiser and David Icke …….you were right about the corruption by the financial and political elite, I will give you that much.

But what else are you right about?

Gazza is back in rehab after being released after drugs charges