Nicotine patches do not appear to help pregnant smokers to quit, according to a study published on bmj.com today.

Smoking during pregnancy increases the risk of adverse pregnancy and birth outcomes and may have long lasting effects in offspring.

In England, 26% of women smoke in the year before their pregnancy and 12% smoke through to delivery. The rate is similar or even higher in other high income countries.

So a team of researchers based in France set out to assess the efficacy of 16 hour nicotine patches among 402 pregnant women aged over 18 years and between 12 and 20 weeks’ gestation, who smoked at least five cigarettes a day.

Participants were randomised to receive either nicotine patches or placebo patches up to the time of delivery. Doses were individually adjusted to try to match participants’ nicotine intake to that achieved by smoking.

Nicotine patches offered no benefit over placebo in terms of increasing smoking cessation or birth weight. 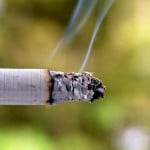 Complete abstinence was achieved by only 11 (5.5%) of women in the nicotine patch group and only 10 (5.1%) in the placebo patch group. The average time to the first cigarette smoked after target quit date was 15 days in both groups.

Average birth weight was 3065g in the nicotine patch group and 3015g in the placebo patch group.

Blood pressure was significantly higher with the nicotine patch than with placebo, suggesting that further studies with nicotine in pregnant smokers should control for blood pressure, they add.

“These are disappointing results and should encourage efforts to evaluate new approaches that are both drug and non-drug related,” conclude the authors. “In the absence of evidence based drug interventions, behavioural support remains the core intervention to help pregnant smokers to quit.”

In an accompanying editorial, Leonie Brose at the Institute of Psychiatry, King’s College London, points to the delay in behavioural support in the first two weeks of the study, and suggests this may explain why both groups had low success rates.

However, she says, in contrast with disappointing results and a slim evidence base for drug treatment, good evidence shows that psychological interventions help pregnant smokers to quit.

“It may be too early to abandon the option of NRT entirely,” she writes. “However, a much greater effort is still needed to identify, test, and deliver more effective treatments for pregnant smokers who struggle to quit.”