The first question levied at the panel regarding the parliamentary vote on holding an EU referendum was not unexpected, to which the representatives of the three main political parties presented an almost united front in as much as they voiced their objection to the timing of any such referendum whilst Europe is in deep financial crisis.

Again this was not unexpected and nor was Nigel Farage's stance on Europe. But what was noticeable and more than evident was the change in the audience's mood at Nigel's comments, which were unanimously supportive and shone clear light on the fact that the majority of the British people want an EU referendum on British sovereignty and the U.K.'s relationship with the rest of Europe. 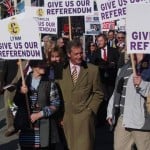 Farage went on to point out that the government's own e-petition website, which was set up to extrapolate data over public opinion that would then be translated in parliamentary debate was being ignored.

Labour's Gloria De Piero came across very poorly with ill thought arguments especially with 2 thinly veiled attempts to align herself with protesters and the youth of Britain by saying she had been involved in protests in her teens whilst lacking any real coherence in responding to the audience's questions.

Iain Duncan Smith gave a decent performance (even though he made a rather bad decision in trying to bury the truth of Farage's comment over David Cameron's U-turn on his EU referendum Cast Iron Guarantee) and did a half decent job at damage limitation over the continuing EU tensions rippling within the government and Conservative Party.

Lib Dem MP, Jo Swinson did her best to follow her party line regardless of the deep divide between Lib Dem policy and public opinion over Europe and Julian Fellowes brought a little humour into the evening's proceedings and took quite an anti-EU position that appeared more aligned to Farage than Duncan Smith.

And Julian's thoughts on Europe may add weight to Farage's comments in the London Evening Standard [1] that we may see many Tory defections to UKIP.

Is a Tory exodus to UKIP on the cards? If so will it precede the next general election campaign? Only time will tell on that one.

"The response from the Question Time audience increasingly reflects the mood of many people in the UK.

They feel cheated that all three party leaders instructed their MPs to vote against a referendum. Frankly, the public feel ignored.

UKIP is gaining more and more members on a daily basis. People have become fed up with the political elite of the country who seem not to listen to them. UKIP has had some significant defections from the Conservative Party recently, most notably Lord Hesketh, the former Conservative Party treasurer. But it is not just disenfranchised Tories joining us, we are gaining members from across the political spectrum.

The EU is becoming a big issue for people. It is not just about Europe, but about jobs, the economy and immigration. It is all linked.

UKIP is continuing to grow. It is now clear that the Conservative Party has given up the fight on the EU, for a vote to really count on this issue you have to vote UKIP."