If there was any doubt after last week’s head-to-head between Clegg and Farage over who is winning the EU in/out debate, there can be absolutely no doubt this morning. But now we see the third dog entering the fray quietly hoping to run off with the bone in the form of David Cameron on the BBC this morning.

In a masterclass of sticking to your guns and the truth Nigel Farage completely trounced an ever more desperate looking Nick Clegg as the hour long debate continued.

The audience looked more balanced than seems usual for a BBC programme of this type, but no-one needed the ‘clapometer’ to see that Nigel was edging it over Nick in the studio.

Nigel Farage looked more assured than last week, but Nick Clegg seemed to have lost something and started to resort to what some observers called playground tactics, such as saying that Farage wanted to see the clock turned back with W G Grace opening the batting for England. Even Clegg’s attempts to needle Farage with constant reference to his recent comments about Putin failed to hit home properly.

The polls afterwards showed what a trouncing the floundering Nick Clegg was on the receiving end of, with YouGov putting Nigel Farage on 68% and Nick Clegg on just 27% with 5% undecided. A later Guardian/ICM poll put Farage on 69% and Clegg on 31%.

You can see why some pundits are predicting a total loss of MEP seats for the LibDems in May's EU elections.

This morning we see in the Guardian that Nick Clegg said he actually always thought he would lose the debates …. well why on earth challenge the UKIP leader in the first place then? A better reason maybe that the ‘in’ argument is unwinnable and its just dawning on him. 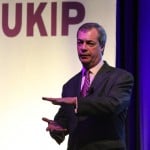 Whereas UKIP is saying that “… Nigel Farage emerged victorious from the second debate against Deputy Prime Minister Nick Clegg with his strong, convincing arguments on immigration, trade and Britain's brighter future outside the EU winning over television audiences”.

In this debate Nigel Farage went further than saying that he wants to see the UK leaving the EU, he also said that he wanted to see all the countries of Europe freed from the shackles of the federalist seeking superstate and the ultimate demise of the EU as an organisation.

This has led David Cameron (in a very ‘timely’ appearance on the BBC this morning) to say that he is somehow in the middle ground and that Nigel and Nick both hold ‘extremist’ views on EU membership. He said that he “didn’t have a dog in the fight, as it were”. Although most would say that, because he was not prepared to enter the debate, there was actually no fight in the Cameron dog and that he was just now sidling up in the hope of being the third hound that runs off with the prize whilst the other two fight it out.

Other politicians don't seem to have been as overtly interested as "Only 63 of the 455 MPs on Twitter tweeted about last night's #EuropeDebate between Nick Clegg and Nigel Farage. They tweeted 351 times collectively, with a huge 88 tweets by Lib Dem MP Julian Huppert alone," said Yatterbox.com.

There will be a live phone in 'your last chance to put Nigel on the spot' tomorrow at 1pm via the Daily Telegraph – http://blogs.telegraph.co.uk/news/damianthompson/100266111/phone-farage-your-chance-to-put-nigel-on-the-spot/