It has been alleged that the UK Independence Party leader, Nigel Farage, had £50,000 to £60,000 in EU funds, now described by some as ‘missing’, paid into his personal bank account.

The reports in The Times and Independent say that the UKIP leader is understood to have received £15,500 a year since 2009 from the EU in order to run his constituency office near Bognor Regis but, according to a former political assistant to Mr Farage, the office was donated rent free by party supporters some 15 years ago.

The recent claim seem to centre around allegations that the true cost of the office was actually nearer to £3,000 a year.

Calling this ‘yet another attack’ in an attempt to smear the party and its leader, UKIP has issued a detailed response to what it calls ‘new smears being peddled by the Times’, as follows:

“Nigel Farage is confident that he has abided by European parliamentary rules at all times when spending allowances. 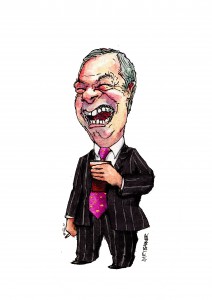 “The Times has raised a number of “fishing type” allegations, all of which lack substance as to their formulation and provide no substantive questions needing to be answered. In fact many of your questions are probably just as applicable to any of the other political parties contesting the forthcoming European Elections with figures and statements duly amended to suit.

“The Lyminster office is not the sole address that incurs expenditure in the pursuance of Mr Farage’s job as an MEP, though it is the most important one. It is quite wrong to claim that he did not declare the rental arrangement with J. Longhurst LTD. until 2013. It has been in the register of members’ interests since 2003.

“Jasna Badzak is a convicted fraudster serving a suspended sentence, whose allegations are unfounded and vexatious. She has never been a press secretary or confidant of Mr Farage’s. To allege that he has transferred EU funds to an offshore account is entirely untrue. Your use of her indicates that you are writing an article with a defined end by inventing a road to achieve that end.

“Mr Martin Haslam never had any responsibility for EU money. He was, for a brief period responsible for the UKIP South East accounts.

“In relation to UK based staff paid from EU funds, they are approved constituency managers in line with advice given to us by the members’ services in Strasbourg.

“You are expected to quote this statement in full in any article you choose to publish.”

Illustration by Gary Barker, who does not endorse this message