Nigel Farage Sticks To His Guns Over EU Foreign Policy

After his recent head-to-head debate with the Lib Dem leader, Nick Clegg, over membership of the EU the UK Independence Party Leader, Nigel Farage, was criticised for siding with Vladimir Putin after Russia’s annexation of the Crimea when he said that the EU had blood on its hands over the issue.

The UKIP leader has now hit back by saying that its not just the Ukraine where EU foreign policy has failed. He says that the Syrian civil war was also made worse by the EU and that our involvement in Libya has just made a bad situation more dangerous.

“We are seeing vanity take the place of reason in foreign policy and the result is to destabilise a whole series of countries to no positive effect that I can discern. It is not just the Ukraine,” he said in a statement.

“The civil war in Syria was made worse by EU leaders stoking the expectation of western forces helping to topple the Assad dictatorship despite the increasing dominance of militant Islamists in the rebellion.

“In the case of the Ukraine, Brussels has for many years been feeding an entirely unrealistic dream of a future as an EU member state and large net recipient of funds.

“This has encouraged brave young men and women in western Ukraine to rebel to the point of toppling a legitimate president and led to the utterly predictable debacle whereby Vladimir Putin has annexed part of the country and now casts a long shadow over hopes of genuine democracy in the rest of it. 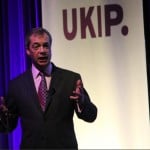 “I do not support what Putin has done – of course I don’t. But the approach of David Cameron, William Hague, Nick Clegg and other EU leaders has been disastrous. If you poke the Russian bear with a stick he will respond. And if you have neither the means nor the political will to face him down that is very obviously not a good idea.”

Of Libya he said, “It is ungovernable, unstable, divided and very, very dangerous. If that is a foreign policy success, I would hate to see what a terrible failure looks like.”

He ended by saying, “The British public were already fed up of being dragged into conflicts where no pressing national interest was at stake. I know many people are, like me, now deeply worried about weak and vain leaders allowing an expectation to grow up that European countries such as Britain will always side with uprisings in the naive belief that benevolent liberal democracy is bound to replace existing regimes, fundamentally imperfect as they are. That is not the way the world works. So I repeat the charge: the EU has blood on its hands."