UKIP leader Nigel Farage will use media appearances in London to highlight how both the Conservatives and Labour are the parties of the status quo when it comes to handing more money and power to Scotland.

Mr Farage will reflect on how the other parties have appeased the "SNP bully" for too long, and how UKIP is the only party offering real change on the Barnett formula, and a fairer, more equal deal for English taxpayers.

Mr Farage has also commented that UKIP is the party of "all four corners" of the United Kingdom, having elected representation in all of the UK's constituent countries.

Nigel Farage said: "This election debate is becoming increasingly dominated by talk of a Labour-SNP coalition. 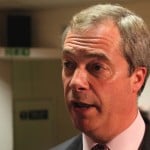 I would urge Labour voters in the Midlands and the North where UKIP are the clear challengers to vote for us to stop this happening.

"As for Mr Cameron's poster showing Alex Salmond taking money out of an English pocket voters should be reminded that David Cameron joined the two other leaders in the appeasement of the SNP and he is guaranteed to continue with the Barnett Formula. As such this poster is sheer hypocrisy.

"I promise that UKIP MPs will be the only true opponents of the SNP and will fight for England and Wales to get a better deal. All you have to do is go out and vote for us on May 7th."