In a move that will strike a chord with many workers Nigel Farage, the UK Independence Party leader, has said that UKIP will ‘tackle the scandalous zero-hour contracts’.

Writing in the Express in his weekly piece ‘Farage on Friday’, Mr Farage says that, although he is a keen champion of enterprise and competition, he believes that zero hours contracts are not fair to workers in the general way they are being used today.

He says that it reminds him of dockers in the 1920s waiting outside the gates for work on a daily basis with some being chosen and the rest going back home with nothing. And that is how some big household names in business are now doing business says the UKIP leader.

Nigel Farage is not the only one pointing out the problems of zero hour contracts though, a new report from Cambridge University says that their use is causing damage to the mental health of the employees of an unnamed supermarket chain.
Mr Farage  does go on to say that he does not want to stop zero hour contracts completely as they do have their place in certain circumstances. But what has happened is that big business has taken advantage of them leaving many workers with no security for them and their families.

Apart from being the right stance to take this of course is a direct play at stealing the Labour vote in the run up to the European elections. It also helps combat the claims made by some that UKIP is just another party backing big business at the expense of workers. 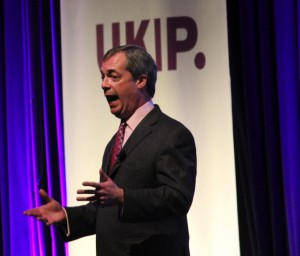 However, these contracts are used because there is a supply/demand imbalance in the UK workforce where the employer is able to dictate the terms. The use of zero hour contracts also suits government as it helps to spread the available work and wages out amongst the people – however unevenly. Should a government wade in and set minimum working contract terms then we could end up with fewer people lucky enough to have jobs with good wages and the rest on benefits. But consider an opposite scenario; what would be the position with wages, employment contracts and pensions if there were not enough workers for the available jobs? Silly question really when you think about it, we would just import workers of course. But we don’t seem to be able to turn the tap off when we don’t need any more – big business likes it that way anyway.

Some have claimed that the UK needs a growing population to bring prosperity and jobs for all, but a look around at the widespread use of zero hours contracts, stagnating wages and the numbers now going self-employed as well as high levels of youth unemployment counters that argument. And why we have to extend the retirement age also seems strange in those circumstances.

Another point is that, as wages go down, the people that make the ‘stuff’ will at some point no longer be able to afford the products they make. At that juncture we would have to look to exporting more (we already are), which in the end could need to be ever nearer to 100% – and that’s how sweat-shops in some third world countries operate, which only benefits the employer.

In order to address this problem the UK needs to rebalance the worker/jobs balance by limiting immigration and stop kow-towing to big business that wants to flood the country with cheap labour. But the only way that can be achieved is by the UK leaving the EU, as we have absolutely no hope of renegotiating the freedom of movement of people within the Union, whatever the Tory party leader says.

But the worst of all of this may be the vilification of the British worker. We actually hear more nowadays about the ‘lazy brits’ where immigrants ‘do the jobs we don’t want to do’, than we hear about immigrants ‘stealing’ jobs. A very clever political ploy to take the sting out of the argument of anyone arguing against further open door immigration with Europe.