David Cameron is today flitting between Brussels and Berlin, the two key seats of Government for Britain. In both he is trying to be statesmanlike. He is calling for 'action' and 'reform'. He is highlighting the mutual dependence on trade and the sincere hopes and wishes that the entire Eurozone doesn't fall apart in an uncontrolled death/default situation.

Of course his slinky words will, as the phrase goes, 'butter no parsnips'. They will be politely listened to and ignored by Barroso and Merkel. After all why should they listen to him?

They know what they want, and they have a good idea on how to get it. And Cameron's position in all this is entirely untenable.

Firstly they want to hit the City of London with the job-crushing Financial Transaction Tax. We all know, and even Cameron knows that this will have a massively disproportionate impact on prosperity here in the UK. Listen to the less than gentle tones of Volker Kauder, Merkel's chief Parliamentary ally in the Bundesrat stating quite clearly that the UK will not be able to block the tax.

Instead Cameron has sent his B team into bat, with Mark Hoban telling the Treasury Select Committee not to worry; we can use the mysterious Luxembourg compromise. What on earth is that, and how will it protect us?

This compromise is a device that allowed the French in 1966 to reject reform of the Common Agricultural Policy, by allowing them to say that massive subsidies to their farmers were vital to France's national interest. At this point there is no way of knowing – and yes I have asked the Commission for a ruling – whether the UK government will be able to use this arcane rule to protect our interests, but it is apparent that the German's think otherwise.

Essentially Cameron is on a fool's mission. Whatever he says it doesn't matter. He and Britain are sidelined in this debate and will be expected to, and indeed will, pay. The discovery of the German Foreign Ministry paper that makes it clear that changes to the Treaties to allow the monetising of the European Currency will be done in baby steps in order to allow Cameron to duck a referendum in Britain says it all about the Prime Minister's divided loyalty.

Nobody can seriously think that he wants to see the destruction of the city. But because he rejects out of hand his strongest negotiating point there is nothing he can do about it. 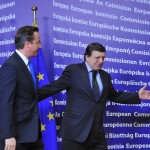 The only way that he can get concessions, get powers back, indeed act effectively on the European stage is if he carries a Referendum Bill in his back pocket.

Look Jose, look Angela, I cannot do this without some form of reciprocity. The people of Britain will not allow me to.

It reminds me of the situation at the Congress of Vienna where the autocratic rulers of our alliance against Napoleon just didn't understand why the British representative couldn't just do what they did and make formal agreements immediately and in person. The Tsar, The Prussian King, Metternich and Talleyrand were dumfounded by how hard it was to get the British signature to the text.

By their actions over the European Crisis it is apparent that they still don't.