Nigel Farage has confirmed that he will be standing for election at the next general election in 2015. He has not though said which seat he will contest but many believe it will be for South Thanet in Kent against Tory Laura Sandys, although Mr Farage did himself drop in the word Folkestone.

Mr Farage was speaking on The Marr Show this morning (Sunday 6th October 2013) and, in anticipation that the home secretary, Theresa May, would be appearing later, he said that none of the other parties was doing or saying anything about the potential influx of Bulgarians and Romanians at the start of next year and challenged them to actually do something about it. He also had to correct Mr Marr part way through the interview and say 'Not end immigration but control immigration'.

Asking whether the party could survive the 'unforgiving scrutiny of a general election campaign' Mr Marr pointed to the recent antics of Godfrey Bloom who, apart from his comments about women and hitting a journalist with a party leaflet, has now said that the party hierarchy has stopped caring about its grassroots members. Mr Farage replied that the party was changing, it is now taking elections seriously he said and he wants UKIP supporters to challenge the liberal elite, focus on the key messages and not cause distractions.

Asked whether bringing forward a referendum on the EU would suit him Nigel replied that he would be '…absolutely delighted and so would British industry'. Also that now that Mr Cameron had continually flip-flopped over the question of actually having a referendum or not that no-one now had a clue as to where the PM stood on the matter. 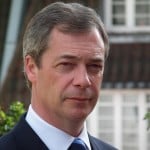 Mr Farage went on to say that the political narrative in the future would continue to be that a vote for UKIP would be an effective vote for Labour, but that in truth it has been proved in the local elections that a vote for UKIP means you get UKIP. The party will, he said, after the European elections in 2014 be targeting seats to gain a number of MPs in the general election in 2015 to get a sizeable representation in Westminster.

When asked about the remarks Lord Heseltine made about UKIP being racist Mr Farage reinforced the previous comments by UKIP MEP candidate Amjad Bashir by saying that Michael heseltine was just an '…out of touch old dinosaur…' and that his party was '…not racist…' but '…standing up for the country'.

It's just a pity that at the end of the Marr Show more time was not allowed for a head to head debate to develop between Nigel Farage and Theresa May when both were sat down on the sofa for some final words. Especially after Mr Farage pointed out to Mrs May that her plans to leave the ECHR would come to nought as long as we remain a member of the EU.