UKIP Leader Nigel Farage has spoken of his utter disgust at the defacing of gravestones belonging to Muslim families in Newport. Racist graffiti was sprayed on headstones of graves in the Muslim section of the cemetery in South East Wales.

The MEP visited the Ghousia Mosque in Leeds with young UKIP member Mujeeb Bhutto at the weekend to condemn acts of terrorism and urge the British public to exhibit common sense after a series of attacks on Mosques across the country in recent weeks.

"It's totally abhorrent to carry out this sort of mindless, disgraceful attack on the graves of the deceased. The poor grieving families must be absolutely crushed by these actions. UKIP as a party absolutely condemns any sort of discriminatory or racist behaviour. I cannot express strongly enough how appalled I am at this incident. I hope the perpetrators are found and brought to the strictest possible justice."

UKIP member Mujeeb Bhutto, who accompanied Nigel to the open day of his mosque in Armley in Leeds on Sunday, also spoke about his sadness over attacks against the Muslim community in the wake of the murder of Drummer Lee Rigby

"It's hard when you see isolated incidents like this but it's important the Muslim community remembers that this act of mindless criminality was carried out by deeply misguided individuals, in much the same way that Britain must not attribute acts of terrorism to the wider Muslim population of the UK. It saddens me immensely that in this day and age such racially motivated attacks still take place. Only last weekend I was with Nigel at the Ghousia Mosque in Leeds where the Imam presented a fatwa with UKIP condemning acts of terrorism and violence. To then see these vandals using the party name is very hard to stomach." 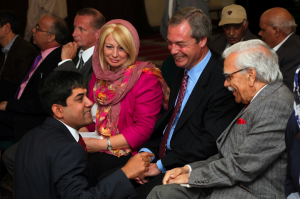 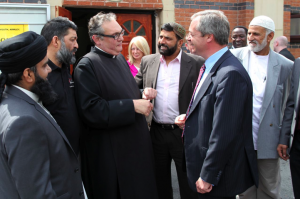