Nissan jobs boost for the UK

The UK car industry received a boost today as Nissan announced that it would be investing Â£125 million in new car production in Sunderland for its new compact car and creating another 2,000 jobs in the process.

The Japanese based car-maker praised the work-force's production rates as it said that the new vehicle, the ‘Invitation’, would be built here from 2013.

The deal was swung by an underwriting of Â£9 million from the UK Regional Growth Fund.

This good news comes quickly after Tesco said that it would create 20,000 new jobs, so it’s not all doom and gloom. 400-600 jobs will be at the plant to take the workforce to about 6,000 and the rest will be created in the supply chain.

The Business Secretary, Vince Cable, said it was a ‘clear vote of confidence’ in the UK economy and its car industry.

With production at the plant expected to start at 100,000 a year it will help maintain Sunderland’s position as the UK’s top car producer. The plant set a record last year of 480,000 cars off the lines and this could eventually get to 600-650,000.

When we keep hearing that UK manufacturing is now a non-event it is surprising for most people to hear from Garel Rhys, a real automotive expert, tell Sky News that we make more cars in the UK now than we did in the 1970s. 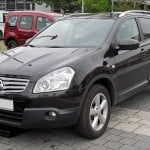 There is however the dampening ongoing threat to 2,800 jobs at the General Motors Ellesmere Port car plant. But Professor Rhys said that it made little sense to shut down such an efficient plant and that a car maker such as the French Peugeot company would be better off shutting down one of its French plants and using Ellesmere Port instead.

Image by Matthias (Own work (own photo)) [Attribution], via Wikimedia Commons

Feeding the crime problem: 3 in 4 men's prisons are overcrowded