The Dutch town of Vaals in the province of Limburg has announced that it will prevent poor or unemployed newcomers claiming benefits and settling there as of September.

This says our EU masters in Brussels, is a gross violation of freedom of movement and residence within the Union and they have called on Vaals to explain itself.

Vaals lies but a stone’s throw from a point where the Dutch Belgian and German borders meet (Drielandenpunt) as well as being a mere 23 km away from Maastricht. 3% of its population are on benefits, but 9% of newcomers make applications for benefits. They cannot support any more they say.

The town has introduced legislation that says that those who cannot show sufficient financial means to support themselves will not be able to settle there.

To do this they are relying on Article 7(1) of the Free Movement Directive, which allows EU citizens from one member state to settle in another only if they have “sufficient resources for themselves and their family members not to become a burden on the social assistance system of the host Member State”

Radio Netherlands says that there are reports that just across the border from Vaals the Belgian town of Plombieres has already started barring EU citizens who cannot support themselves. Rotterdam has also followed this principle for the last decade.

Jean-Paul Kompier of the local ‘Affordable and Sustainable Vaals’ political party said that the geographical position of Vaals is attractive to people as it is very close to the amenities of the neighbouring German town of Aachen but has cheap dilapidated properties for rent at as low as â‚¬80 a month.

Here then we have an EU directive, which allows for the application of common sense, conflicting with an EU ‘fundamental right’. One wonders which will prevail. 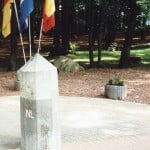 The worry for the rest of us is whether this will become an EU test case to prevent communities turning away people who move there purely to become a drain on local resources. This would further erode the rights of sovereign states to run their own affairs.

Andrew Withers of the Libertarian Party and Clevedon town councillor said ‘In May I was elected to my local Town Council in the West Country and amongst the where to site the dog bins and bollards, it appears that along with my fellow councillors we may have accrued powers devolved down from the EU to move people on from the town that are immigrants with no visible means of support other than benefits.

‘This appears to be reviving the old parish poor law where you can drive the poor and foreigners not from your parish across the parish boundary so as not to make them a charge on the parish rates.’

‘How that would work here I am not sure whereas in Europe power is devolved to the local mayor, in Britain the administration of benefits is firmly in the hands of Whitehall.’

‘The EU seems to be curious mix of big supra national spending and largesse, combined with devolving the more unpleasant tasks to local communities.’

CHART OF THE WEEK: Inclusive Wealth