This is all part of the 'Transport 2050 roadmap to a Single European Transport Area' that will usher in a 'profound' move from fossil fuel to more eco-friendly alternatives.

The plan also means diverting 50% of passenger and freight traffic from air and road onto rail and water by 2050.

Siim Kallas, the Commission vice president for transport said “Curbing mobility is not an option. Nor is business as usual. We can break the transport system’s dependence on oil without sacrificing its efficiency and compromising mobility. It can be win-win.”

"That means no more conventionally fuelled cars in our city centres," he said. "Action will follow, legislation, real action to change behaviour."

But it seems that our HM Government has not quite boarded this particular band-wagon as UK Parliamentary Under-Secretary of State for Transport, Norman Baker, has come out very vigorously against the proposal.

The Association of British Drivers spokesman, Hugh Bladon called this a 'crazy' plan and said of Siim Kallas "If he wants to bring everywhere to a grinding halt and to plunge us into a new dark age, he is on the right track. We have to keep things moving. The man is off his rocker." 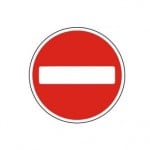 But green groups say the moves are no where near enough. Jos Dings, director of Transport & Environment said “The Commission plans to cut emissions by just 1% a year until 2030, and then 5% a year after that… This is a manifesto for inaction”.

But whatever a UK politician says there will be several more governments of differing persuasions voted in before 2050, some of whom may like this plan. Also the EU federalising machine is always on, day and night. They haven't got us into a single currency (yet), but a 'single European transport area' is another step, however small, in that direction.

There is also the question of 'peak oil'. If, as many believe, we have extracted more oil than there is left in the ground and we use it in a much more eco-friendly way now, then we may well have run out of the stuff in any useful amount by 2050 anyway and have already done the lion's share of polluting the atmosphere. So what's the issue?

But, I ask you, how can we have a single transport area until the rest of Europe converts to driving on the correct side of the road, converting distances to miles and speed limits to MPH? When they've done that, then maybe they can come back with their ideas.

Britons Favour Onshore Wind Over Fracking by Three to One