No double dip recession for the UK

Well, according to the Organisation for Economic Co-operation and Development (OECD) there won't be. Their view is that the UK will experience a moderate downturn followed by a flattening of growth over the next couple of years.

The OECD's assessment is based on leading indicators, which include such things as surveys of consumer confidence and business sentiment. The OECD's leading indicator for the UK has seen a gradual continual decline over the last six months from 103.8 in March to 102.4 in September. Any reading over 100 is a positive thing so it does indicate a slowdown but not into negative territory.

Around the world we see that the OECD expects the growth figures to be mixed.

The US, Germany, Russia, Ireland and Japan look set to expand.

The prospect of China and Brazil under performing may well not be good news for the rest of us. Especially as the OECD says that their CLIs (Comosite Leading Indicators)" …. continue to point strongly downwards, edging below the long term trend and implying that the level of industrial production will fall below its longer-term trend in these two economies".

But overall within the OECD area** growth looks to be on course for steady expansion. 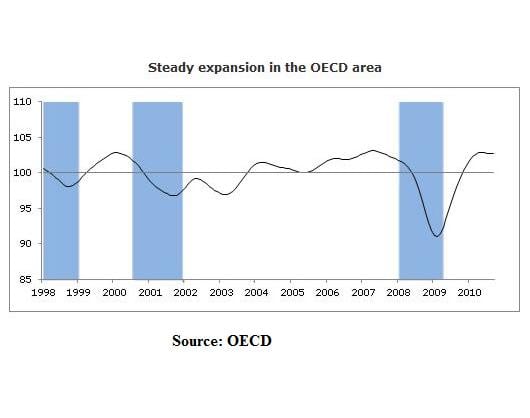 Brazil and China are two of the enhanced engagement countries and Russia is an accession candidate country.