No prison break needed for these Muslims

Monday’s BBC Panorama will tell us that nearly one in seven inmates at British prisons are Muslim. Moreover, the programme is likely to argue that these institutions can become breeding grounds for so-called ‘Islamic’ radicalism.

The Ahmadiyya Muslim Community, which is established in more than 200 countries, firmly believes criminality, radicalism and terrorism are activities firmly opposed to the true teachings of Islam. In certain countries there are hundreds of thousands or even millions of Ahmadi Muslims and in whichever country we are established, independent surveys will always find the overwhelming majority Ahmadi Muslims to be law-abiding and peaceful citizens.

An integral reason for this is that from childhood Ahmadis are taught loyalty to one’s country, tolerance and mutual respect are core Islamic values. Here in the UK, the Ahmadiyya Muslim Community openly pledges loyalty to the United Kingdom. From childhood our members are taught a pledge in which they make an oath of loyalty to this country.

We seek to empower our young people, to teach them that British values are not incompatible with their identity as Muslims – but rather perfectly compatible. We seek for our members, both male and female, to become role models within society.

Each year the Ahmadiyya Muslim Community raises millions of pounds for local charities. In the UK it holds an annual “Charity Challenge”, in which our young members raise hundreds of thousands of pounds for charities including UNICEF, the British Heart Foundation and Barnado’s.

Moreover, wherever anyone is in need we stand ready to help them. For example at the Baitul Futuh Mosque in south-west London, each Friday evening Ahmadi Muslim prepares and deliver food packages for London’s homeless. Last year, 7,000 packets were distributed. We also host blood drives in an effort to save lives and to support national institutions such as the NHS. 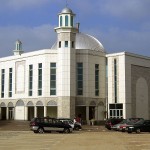 The Baitul Futuh Mosque in London

All of these activities are based on the true teachings of Islam. No Ahmadi Muslim child will ever feel disenfranchised from British society or bear an identity complex – because true Islam teaches a respect for not only your religion but also for your country and its laws and positive values.

The founder of the Ahmadiyya Muslim Community, Hazrat Mirza Ghulam Ahmad, who we believe to be the Promised Messiah, taught that interfaith harmony must be a foundation for any peaceful society. In this vein, earlier this year we organised a Conference of World Religions at the Guildhall in London, at which many of the major faiths around the world participated and were represented. The message was very clear; the root of all religions is peace, tolerance and respect for the law.

The disproportional number of Muslims in British jails needs seriously debating. As an example of a Muslim community that has a long history of positive integration into Western society the Ahmadiyya Muslim Community believes the root cause is an identity crisis amongst Muslim youths who do not understand the true essence of their faith.

Monthly rents in London more than twice the national average