German artist Nora Schultz will present a new performance work for the BMW Tate Live that explores the hyper real and detached nature of cyberspace. Her live performance will be broadcast on 11 December 20:00GMT via the Tate’s You Tube channel.

For this work Schultz references the Stephen Spielberg film, Terminal, that sees a man trapped in an American airport terminal when refused entry to the US and simultaneously not able to return to his own country after his nationality status is declared invalid. Schultz sees parallels in the exaggerated reality and isolated existence of the airport terminal, emphasised in the film, with the nature of performance and the position of a performer.

In this work the Performance Room space becomes a terminal to cyberspace. In Terminal +, Schultz plays the part of the protagonist stationed within the terminal. During the performance she deconstructs the foam-lined interior, using sections of the foam to print their folded shapes on the floor and walls of the room. As the performance progresses, there is a transformation from the physical to digital as the work is broadcast live via the Internet. A countdown, a recurring element in Schultz's work, will be present through a looping voiceover in a soundtrack that accompanies her performance.  The soundtrack also includes the voice of the protagonist in Terminal +, that Schultz acts out in her performance, giving voice to an inner monologue about their experience within Terminal + and their journey into cyberspace. 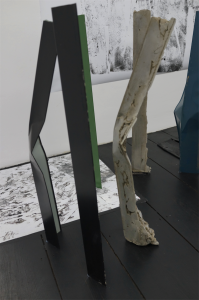 A live Q&A with the artist will be broadcast from the Performance Room space immediately after the performance.