With medical science coming on leaps and bounds in recent years, it is little wonder that fewer people are thinking about what will happen should the worst occur.

The rising average age in Britain has had a number of consequences, both on the economy and on the rate of employment.

But one of the more personal consequences, according to recent statistics is that not enough people are making wills.

With over half of the country without a will, and up to 77% of those with children under five not having made one, it is becoming a large concern for both the government and the general populace.

Often people are unaware of the process of will making, questions such as: what is probate? What is an LPA? And is a self-written will valid? Often come up when discussing wills.

The fact of the matter is, people are just not given enough information about the subject. Another issue is the belief that leaving a will just isn’t worth the hassle.

Whilst death is often an uneasy topic, the British public need to do more to ensure that they are supporting and maintaining their families even after death.

This means going online and researching companies that specialise in will making, or going to your local town hall to get some more information on the legal requirements of self-written wills.

Clogging up the Courts:

Every year thousands of financial disputes end up in court because an enduring power of attorney was not named, or a will was not written.

Thousands of pounds are left in bank accounts of the deceased, only to be reclaimed years later, meaning more court time is taken up.

Similarly, appeals for guardianship or adoption cases are also legal processes which could be prevented by the creation of a will.

If more people in Britain were to make wills, other court cases, such as those related to criminal law would be able to be pushed through the system much quicker.

The legal system is currently overwhelmed due to the backlash of people’s apathy with regards to writing a will. 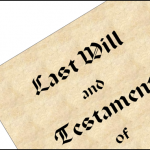 Last Will and Testament

It is now easier than ever to make a will, as you can compare hundreds of solicitors online and fully educate yourself on the laws regarding self-written will making.

By giving as much information as possible in your will, you are ensuring your family are supported and normal family life is maintained in the advent of your death.

This is especially true with regards to the distribution of your estate, the care of your children, or even the care of yourself, should you be in a state where you are unable to communicate your wishes.