Now Is A Good Time To Pick Up Some Oil Stocks

Oil's oversized reaction to negative news from Greece and China on Monday should really have come as no surprise with the value of 20/20 hindsight.

I have been writing for some time now that the commodity would break out of its narrowing range and that the more times it failed to break the resistance point at $62, the more likely it was that that break would be in a downward direction. It is logical that the longer that it took, the more violent that break would be. Traders were looking for excuses to sell and last weekend gave them plenty of those. Now that the breakout has happened, the next logical move is a test of the previous lows just below $50 for the U.S. benchmark West Texas Intermediate (WTI) futures. Despite that, though, there are other factors that make it a good time to be buying back into some oil stocks. 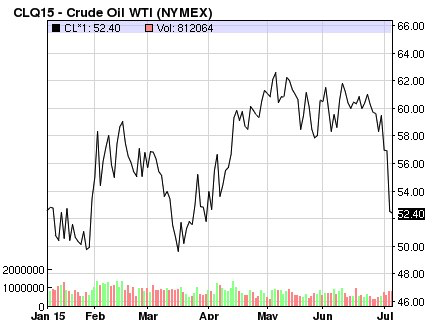 It takes a certain amount of ornery contrarianism to think this way, but the fact that Wall Street analysts are so pessimistic about Q2 earnings in the oil and gas sector is principal among them. The constant downward revision of expectations that has led to an average forecast of an over 60 percent year on year reduction in EPS in the energy sector was fully priced in before yesterday's dramatic fall in oil, and now looks overdone if anything.

Nobody can realistically expect a spectacular earnings season for energy this time around, but, in the short term at least, it is not results in relation to last year that drive prices, it is results in relation to expectations, and there is good reason to believe that those expectations are excessively negative. Look again at the 6 month chart for WTI above and you will see that oil spent most of the second quarter of this year moving sharply upwards to test the $62 level. That makes it likely that some of the worst case scenarios envisioned by CEOs, in their guidance, and the analysts, in their forecasts, have not played out.

Normally, "It might not be as bad as it could have been" is a terrible reason to buy anything. In this case, though, particularly when it comes to the large integrated oil companies, it could well spark a sustained rally that survives even if oil prices do test lows over the next few weeks. That makes relatively small, risk controlled long positions in those stocks a tempting proposition.

Both Exxon Mobil (XOM) and BP (BP) offer logical stop loss levels (Just below $77 and $35 respectively) that would limit potential losses from long positions at current levels to less than 10 percent, while offering considerable upside. Both derive a good portion of their revenue and profit from refining oil in addition to actually extracting it, and refining operations are more profitable in volatile markets than when prices are steady. The volatility at relatively high levels that were a feature of the second quarter, therefore, could be a "win/win" for both companies.

Obviously, backward looking earnings aren't the whole story. If demand in China continues to weaken or if the Greek tragedy drags Europe and the rest of the world into the mire, then energy stocks would be hard hit. That is why protecting positions with stop loss orders is essential if you buy into the sector here. With that said, though, Warren Buffett once famously said that we should be "Greedy when others are fearful." The exaggerated reaction to this weekend's news in the oil market and the extremely low expectations for earnings suggest that there is plenty of fear around. It may be a good time to get greedy.

By Martin Tillier of Oilprice.com

Why This Software Tech Stock Is So Attractive