If the polls are right, most of the rest of the world should be pretty happy this morning. While President Obama was re-elected comfortably under the US electoral college system, the popular vote seems to have been more evenly split, with as little as 2 percentage points separating the two candidates. Outside the US though, people had a strong preference for Obama over Romney, and the result is likely to be well-received.

For all the expense and effort, however, winning the election was the easy bit. Now Obama’s real task begins.

The President will have to tackle a number of critical issues in his second term, not least the war in Syria and continued tension elsewhere in the Middle East. And he will have to form and implement policy with Congress, which will once again be divided – the Republicans have retained control of the House of Representatives.

But his biggest challenge will be fixing the US economy. It was the number 1 issue among voters in this election, even if Obama bucked the trend and became the first President since Roosevelt to retain office with such a bad economy. There have been recent signs of improvement, particularly in the jobs and housing markets, but the deficit is a big problem.

The immediate priority will be to broker a deal to avoid the so-called ‘fiscal cliff’. Under current law, substantial spending cuts and tax rises will kick in next year, unless politicians can agree a different approach. The fiscal tightening is estimated at over 4% of US GDP – more than enough to push the world’s biggest economy back into recession. Thousands if not millions of Americans would lose their jobs.

While the near-term focus should be on limiting the fiscal tightening that is about to ensue, over the longer term the US does have to get its deficit down. The US, like France, has a long history of running deficits – since 1980, only Bill Clinton can reasonably claim to have balanced the books (no, Reagan didn’t do it). But even the US cannot run a deficit of 6% of GDP forever. Sooner or later it will have to borrow less, or investors will seriously start to question the safety of US bonds.

The best way to close a deficit, as much of Europe has demonstrated over the past few years, is by generating some economic growth. Sadly, in most instances European experience serves as a lesson in how not to do it. Republican claims that tax cuts could generate growth of 4% a year are fanciful at best – there is little chance of that pace of growth on a consistent basis, whatever the tax rate. But as spending is pruned, the support that the deficit is currently giving the overall level of economic activity will wane. 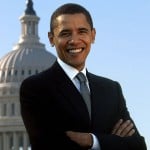 Most other countries are hoping for other people to get them out of the resulting hole – or, in the jargon, for external demand to drive domestic growth. The weakness of the world economy is one reason why spending cuts have been so painful. Happily, the US is far less dependent on external demand – it is a relatively closed economy, at least as judged by the scale of exports and imports relative to GDP. Its banking sector is also in a better shape than Europe’s, with many of the painful decisions already having been taken and dealt with. As such, if the nascent recoveries in construction and labour markets take hold, the US could soon return to more robust growth rates. In that scenario, unemployment should continue to gradually fall, and the rest of the world would feel the benefit of having another strong anchor to global growth. Provided, that is, the new President can persuade the Republicans to help him stop the economy falling off the cliff it is currently heading towards. The stakes – for all of us – are very high indeed.