The World Meteorological Organisation (WMO) is to discuss the use of lasers to influence the weather during its meeting next month.

So our response to the climate change that many argue is indirectly down to human activity, is to cause further disruption to our weather patterns via direct human interference. The stuff of sci-fi is becoming reality.

The Daily Telegraph reports that experiments using high powered lasers show that ice crystals can be formed and water condensation can occur, the first step in creating clouds.

They have also been able to show that lightning discharges can be initiated and 'steered' using lasers.

The second Conference on Laser, Weather and Climate (LWC2013) follows on from the first in 2011 and its purpose '……is to facilitate the contacts and sharing of ideas between researchers from different communities, including specialists of both the atmosphere and laser physics'. 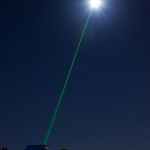 Laser by woodleywonderworks via Wikimedia Commons

The conference organisers, Professor Jean-Pierre Wolf and Dr Jerome Kasparian, say on the LWC website that '……ultra-short lasers launched into the atmosphere have emerged as a promising prospective tool for weather modulation and climate studies'.

This may sound exciting to those who wish to irrigate the deserts of the world and move lighting away from sensitive areas where it could damage infrastructure, but of course there is always the military angle to consider as well.

More importantly there is also the geopolitical angle. Whoever controls such a system carries a lot of clout.