On that day a fire broke out in the Barents Sea Roslyakovo shipyard dock the vessel was occupying, which spread to the submarine when some wooden scaffolding caught fire.

This then spread to the rubber anechoic (sound proofing) tiles attached to the submarine’s hull.

At the time it was claimed that the 167.4 metre long vessel was not carrying any nuclear weapons.

The 18,000 ton Ekaterinberg is an SSBN, a nuclear submarine capable of firing intercontinental ballistic missiles (ICBM). It was launched back in March 1985 and forms part of the Russian Northern Fleet.

But according to the Kommersant-Vlast magazine, contrary to official reports, another Chernobyl was very narrowly averted as the K-84 actually had its entire arsenal onboard during the incident. The vessel was only in for minor repairs so off-loading the 16 missiles and 12 torpedoes (some possibly armed with nuclear warheads) was not conducted. 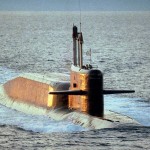 The magazine said it had obtained the information from several Russian Navy sources and that ‘Russia, for a day, was on the brink of the biggest catastrophe since the time of Chernobyl’.

The magazine’s claims are refuted by the Russian Navy and others who point to the Russian-American Prague agreement, which would have required K-84’s ballistic missile silo doors to be open to prove to orbiting US satellites that there were no ICBMs on board.

The Russian deputy prime minister, Dmitry Rogozin, has said that it will cost 500 million roubles (Â£10.6 million) to repair.

Mansion tax is still on the agenda

A calm start, but are we in for another rough week?