Number of AIM de-listings jumps 79% in one quarter

25 companies left AIM in the last quarter, up from 14 in the first months in 2013 – the biggest number of de-listings in over a year, according to research by UHY Hacker Young, the national accountancy group.

15 new companies listed on AIM in the last three months, the most new listings in a single quarter since 2011. However, UHY points out that recent market slides might hit future IPO activity.

UHY Hacker Young says that while the market has been attracting more new listings, the number of companies quitting the market, particularly due to “financial stress and insolvency,” has increased.

Seven companies cited financial stress as a reason for leaving AIM in Q2 2013, up from only two in Q1 2013, and the highest number in a year. However, 10 of the 25 de-listings were down to M&A activity.

Laurence Sacker, Partner at UHY Hacker Young, says: “AIM appears to have taken a turn for the worse since the previous quarter, when AIM exits had been at the lowest point since the financial crisis.”

“While the number of new listings is up, this is outweighed by a substantial increase in the number of companies de-listing from the market, so the AIM market is shrinking again.”

“The fact that a substantial proportion of these de-listings is due to M&A is good news, however the sudden increase in the number of de-listings due to financial stress in particular is evidence of how much impact the prolonged recession has had on small caps.”

Laurence Sacker adds: “We’ve already seen the negative effect that talk of ending quantitative easing has had on equity markets. Many small cap companies will be hoping that this sort of economic stimulus is not switched off too soon.”

UHY Hacker Young adds that the volatility of the stock market in recent days may dampen IPO activity. In the last couple of weeks, several high profile floats – such as Guy Hands' planned Â£850 million IPO of Deutsche Annington – have been halted due to adverse market conditions. 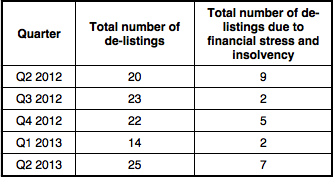 Laurence Sacker adds: “Some commentators are predicting that market volatility will prompt companies to abandon IPO plans in the short term, and the glum news about Portugal shows that there is still scope for a very bumpy ride out of recession.”

“However, there is some good news for AIM. From Autumn 2013, the market will benefit from the government’s recent confirmation that AIM stocks will included in ISAs – which should attract more retail investors to the market.”

Inequality in the UK: DEMOS and the One Society