Number of MBOs down 49% compared to just two years ago

The number of management buyouts (MBOs)* in the UK has dropped by 10% in the last year**, as Brexit fears negatively impact management's and private equity's perception of risk says Moore Stephens, the Top 10 accountancy firm.

In addition, Moore Stephens says that MBOs are down by 49% compared to only two years ago, when 112 private equity-backed MBOs were completed.

Moore Stephens says that a major driver behind this drop in MBOs is the political and economic uncertainty related to Brexit, which has resulted in nervousness from management in making any 'risky' moves, such as taking on significant personal debt as part of an MBO. Private equity funds which back these MBOs are also more cautious over the multiples they pay in these deals as visibility over UK GDP growth clouds over.

Moore Stephens say that there is little evidence to suggest a lack of supply of debt funding to deploy in MBOs, but rather a reining in of appetites amongst the management teams that would be holding the equity after the MBO.

Some sectors, such as financial services, face the possibility of increased operational costs due to Brexit. Brexit-related knocks to confidence may have contributed to the overall number of M&A deals dropping by 22% in the last year.

Moore Stephens says that the lack of MBOs may be damaging for the economy in the long-term as it can prevent the reinvigoration of businesses driven by a change of management control. Through an MBO or MBI, businesses can benefit from the implementation of new ideas and an overhaul of strategy that can subsequently drive growth. Ownership moving from one generation to the next can bolster what might have become a 'lifestyle' business for the previous owners. From a tax perspective, concerns from business owners on the Entrepreneurs' Relief tax changes which the Government has implemented has also caused some MBOs to be put on hold.

Examples of MBOs that went ahead in the last few years include:

"The pre-Brexit world creates significant uncertainty which has had a damaging impact on the number of MBOs that are completing.

"MBOs are vital part of how the UK keeps businesses at the cutting edge of their industries on a national and international stage.

"They encourage the refreshment of strategy and innovative leadership at senior management level, and give companies a greater opportunity to compete more effectively and pursue growth.

"More than ever, it is vital that UK businesses remain ahead of their global rivals in order to strengthen the economy in times of uncertainty, and MBOs support this objective." 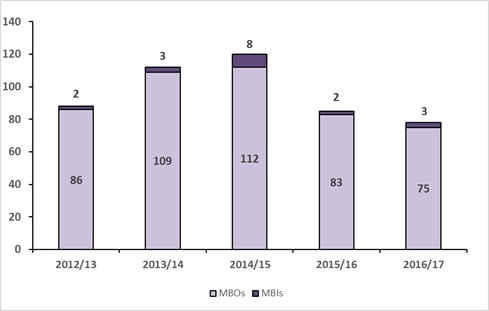 The odds are not good for Euro survival

Investor Confidence Falls in August by 4.5 Points to 108.7