• The average UK pension pot is just £30,000 – the income from letting just one spare room is more than four times this4

The number of UK over 50s taking in lodgers and becoming 'live-in landlords' has risen by 41% in a two-year period, according to new data from the UK's biggest flat and house share site SpareRoom.co.uk.

Moreover, almost £100,000 (£97,750) of these earnings are completely tax-free, due to the government's Rent A Room scheme threshold, which allows Britons to earn up to £4,250 per year from letting furnished rooms in their homes, without paying any tax.

The table below shows 10 cities (outside London) where people can earn above £100,000 during retirement from taking in one lodger: 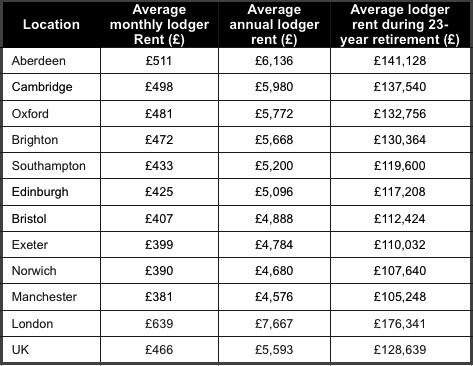 "Retiring from your career doesn't mean you have to stop making money. Monetising existing assets – such as renting out an otherwise under-used room – has no long-term liability for the estate, unlike equity release. Plus, it brings in more than four times the income of the average paltry UK pension pot. So there's no reason why retirees shouldn't find their entrepreneurial streak after bowing out of the workforce.

"There's far less stigma around taking in lodgers amongst the older generation, many of whom grew up in the post-war years when lodging was widespread. Many retirees find they get as much satisfaction out of the companionship of taking in lodgers as they do from the income.

"But if the government wants to improve the outlook for pensioners, it needs to drive awareness and further incentivise Brits to become live-in landlords by raising the Rent A Room Scheme threshold, which hasn't changed since 1997. This will also free up supply, and ease the now colossal demand on the rental sector as house prices rise to unaffordable levels. Our 'Raise The Roof' campaign calls on the government to raise the threshold to £7,500 per year to reflect UK rents."