At 74.1 percent the employment rate (the proportion of people in work aged 16-64) was at its highest since comparable records began in 1971, says the ONS. 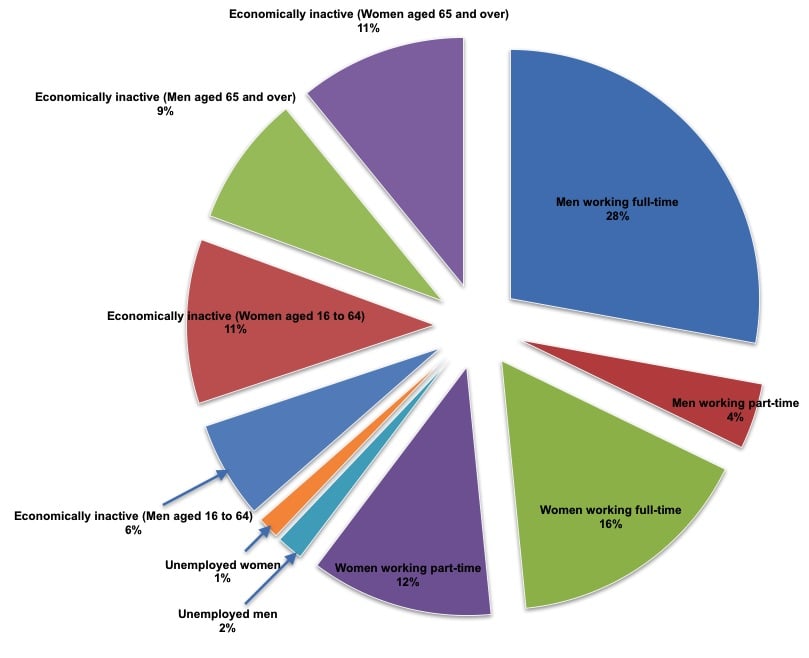 The unemployment rate (the proportion of the labour force (those in work plus those unemployed) that were unemployed) fell to 5.1 percent.

The number of economically inactive people aged 16-64 fell to 8.88 million.

“Despite employment climbing to a new record high of 31.4m in the three months to December, a 1.1% quarterly surge in the economically active population was sufficient to keep the jobless rate unchanged.

“At the same time, Q4 saw the largest percentage rise in the workforce in almost two years. This suggests that the forces which have been driving workforce growth in recent years – inward migration and greater participation by older people in the labour market – are continuing unabated. Meanwhile, the timelier claimant count measure of unemployment fell to 2.2%, the lowest since 1975.

“But the good news stops there. Hours worked rose by 1.7% in Q4 with GDP increasing by an estimated 0.5%. This implies a sizeable1.2% drop in productivity in the last three months of 2015.

“Recent months had suggested that the jobs market was falling back into the dynamic of an employment-rich and wage-poor expansion that characterised the early part of the economic recovery. The latest pay numbers offer more evidence in that direction. Growth in total pay slowed to a ten-month low in December, while the single month measure saw particularly sharp fall in pay rises in the private sector, down from 2.3% in November to 1.7% in December.

“Compositional effects, noted by the MPC in February’s Inflation Report, may be temporarily weighing on pay rises. And ‘noflation’ could also be making its presence felt in pushing down pay settlements. But a more flexible labour market and the effect of welfare reforms also point to a lower structural rate of unemployment in explaining why pay growth remains muted. If this is the case, the UK may be looking at further falls in unemployment with little danger of a wage-price spiral rearing its head.”

“It’s good news that employment is rising, but more needs to be done to ensure these jobs are decent quality.

“Wage growth remains in the slow lane. Putting money back into people’s pockets is essential to securing a strong recovery, and avoiding the debt-fuelled spending boom that caused the last financial crisis.”

“The UK’s strong employment remains one of the few bright spots in a world where there are an increasing number of economic uncertainties. Wage growth may appear modest in nominal terms, but this could be a feature of impressive increases in the number of young people who are in work. Moreover, with inflation still in the doldrums, real wage growth is providing a boost to employees and underpinning the UK’s consumer-led growth throughout 2016. But don’t bank on the lines continuing to go in right direction for ever.

“With pension auto-enrolment kicking in for many small firms this year, at the same time as the apprenticeship levy – essentially a payroll tax – and the National Living Wage, the cost of employing people is shooting up. How businesses will respond to these policies remains open to debate, but cumulatively, they are set to cost firms billions and could lead to low-skilled workers being priced out of the job market. The government must be aware of this, and resist any further moves which make it even more expensive to create jobs.”

“Today’s figures show yet another record high in the number of people who choose to work for themselves. The self-employed are driving a structural evolution in the UK labour market, providing our economy with flexibility and an essential competitive edge.

“This significant increase comes just days after the release of the Independent Review of Self Employment, which identified some of the biggest benefits and challenges facing this key sector of the UK economy.

“With so many people making the decision to be their own boss, it’s now important for the Government to move ahead with implementing the Review’s recommendations. The upcoming Budget represents a great opportunity to announce maternity and adoption pay for the self-employed on the same level as employees. Working for yourself is a positive choice, with our research showing the vast majority (86%) are very satisfied with the way they work. It’s vital the Government supports this growing part of our economy as they are here to stay.”

Responding UKIP Employment Spokesman Jane Collins pointed to the "obvious and transparent discrimination against British workers" which has been taking place in the UK jobs market:

"For years now companies have been actively recruiting Eastern European workers for UK jobs, offering relocation packages and accommodation for work in sectors from health care to building.

"On the UK government's own website we see this discrimination taking place, with painters and decorators expecting to speak Polish or estate agents in Yorkshire needing to speak Romanian. To openly specify workers from that country would be illegal but to ask for language fluency isn't.

"So it's no wonder we have seen such a boost in foreign workers in the UK jobs market: 75% of new jobs last year went to non UK workers. Big companies can hire cheap workers at the minimum wage and use tax credits funded by British tax payers to top up their low salaries. No wonder these huge companies love the EU!"

“Today’s fall in unemployment is welcome but there are no signs the Tory pay crisis is going away.

“At this rate, after ten years of the Tories, the pay of working families will have risen at its lowest level in nearly a hundred years.

“To make matters worse, when low and middle income families most need in-work support, the Government is pulling that support away.

“By forcing people onto the cut-back version of Universal Credit, the Tories will make life even harder for workers across the country whose pay-packets are already stretched to breaking point.

“Ahead of next month’s Budget, Labour is calling on the Government to immediately reverse cuts to Universal Credit that will see over two million working families an average of £1,600 a year worse off.”

“While it’s encouraging that employment continues to rise strongly, lacklustre pay growth underlines the need for a pickup in productivity before wages can rise faster.

“Propelling innovation by broadening access to existing research and development (R&D) incentives and not adding to the cumulative burden on businesses, from recent Government policies, will help firms to create more jobs and boost productivity.”

Occupy the London Stock Exchange digs in for the long haul