This budget day, the National Union of Students (NUS) and students’ unions across the country are urging the government to stop the sell off of the student loan book.

Students and NUS officers asked the Government to once again stop the sell off by presenting a giant cheque for £10billion (what the government hopes to raise through the student loan book by 2020) to some unscrupulous bowler hatted fat cat profiteers outside parliament this morning.

NUS has also started a petition and organised a twitter lobby for 12 noon on Wednesday 19 March, getting students to tweet their concerns to the Government using the hashtag #stoptheselloff.

The government has announced plans to privatise student loans as part of a longer-term plan to raise funds from the sale of public assets to boost investment. 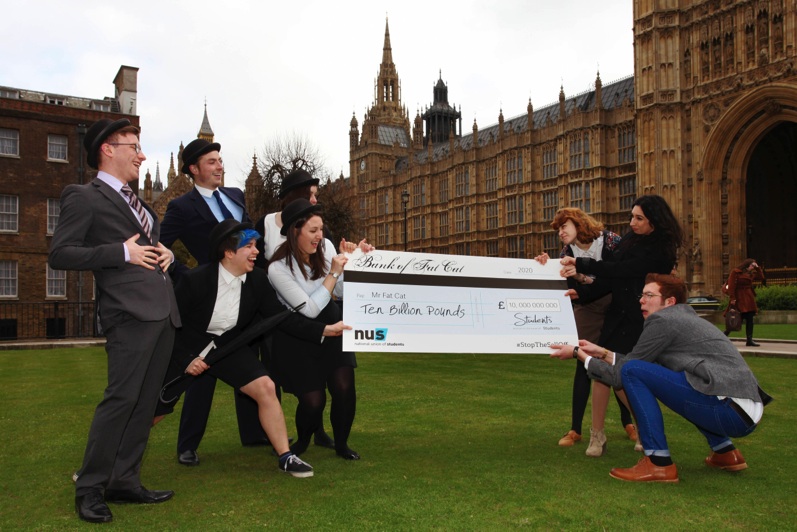 NUS believes that the decision to sell off the loan book at a discount to secure a cash lump sum now makes no economic sense and, in effect, will mean that the public will be subsidising a private company to profit from government debt.

Two previous sales of the original “mortgage-style” student loans, taken out by students between 1990 and 1998, occurred in 1998 and 1999, which transferred £2bn of student debt to the private sector. By doing so, the government lost an estimated £140m in these deals. The remaining mortgage style loans, which have a face value of £890m, are now being sold for the cut-price sum of just £160m to a consortium or private investors.

“We want to use this opportunity to remind the Chancellor of some basic common sense – that selling off huge sums of student debt at a cut price isn’t a good deal for anyone except the businesses who stand to profit from it.

“The impact of this sale won’t only affect borrowers, but will affect everybody. The simple fact is that having these loans on the public books would be better off for the Government in the long run.

“The current student loans system is completely unsustainable. Forcing debt onto students as a way of funding universities is an experiment that has proven not to work and there needs to be some serious thought about moving the system away from this short sighted model.”