Thrusting itself firmly back into the limelight the Occupy Wall Street movement has come up with a bold initiative. The Peoples’ Bailout – a rolling debt Jubilee.

Normally a debt Jubilee would herald the cancelling of all IOUs all in one go, but OWS plan to buy up bad personal debt over time when they can then cancel it, never collecting it.

When someone defaults on an unsecured loan or credit card the lender normally tries for a short time to help the borrower repair the debt. But as soon as it becomes obvious that this is never going to happen then they like to sell it on at pennies in the pound to a debt collector to deal with. The lender then moves on, writing the loss off for tax purposes and ensuring that all the other investors and borrowers interest rates are set to cover the bad debts.

The debt collector that bought the debt then hounds the debtor hard for as long as they can while still adding interest to the loan where they can get away with it. This can prove very lucrative where they bought maybe at only 10-20% of the face value of the debt. They may only get a proportion of it but even half on a monthly drip would bring in a healthy profit.

OWS are turning the table on this practice by buying the debts for a few dollars and cancelling it completely. Because the person that buys the debt can do as they wish with it. 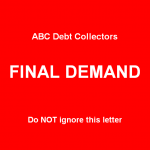 In a test run they bought $14,000 of debt and made it disappear for just $466. Think what they could do with a million or more.

This move will not hurt the banks, they will still get the pennies in the pound/dollar that they would normally get. But it will kick those companies that normally purchase the debt in tranches then send threatening letters, phone calls and doorstep callers to the homes of the distressed debtors.

This may or may not help the debtors credit rating, that would depend on the entry made on their credit file, but it would eliminate the worry of being chased for years and allow them to move on in their lives.

All change! It’s risk off again after traders focus on poor PMI readings