Unrest in the Middle East coupled with Gadaffi's vow to crush the revolt to the last drop of blood has driven oil prices to 2 1/2 year highs and with it the spectre of increased inflation, which has driven many investors to seek the safe haven of precious metals during these troubled times.

Crude futures are now at about $116 per barrel, having hit nearly $120 earlier today, with the chances that it will rise still further weighted heavily on the positive side.

The worry is that these heightened prices will feed their way into the world's economies causing a leap in inflation and end up dragging the still fragile recovery down.

With precious metals long having been seen as the place to put wealth to hedge against inflation, gold and silver have also seen price rises.

Gold has now recovered to about $1415 per ounce having fallen back in late January to $1320.

According to Reuters Africa Standard Bank analyst Walter de Wet said "The support we've seen for gold, given what is happening in the Middle East, is obviously to do with the political issues, but I think it's got more to do with the rising inflation expectations on the back of the rapidly increasing oil price. Given that we've got negative real interest rates once again and higher oil prices … we think there's still a couple of bucks in there" (the gold price).

As gold (and silver) generally rises alongside other asset prices it can be used as a hedge against inflation. But once interest rates start going up this can soon turn against gold as it is a commodity, not a yield bearing investment.

Silver does have wider uses than gold in the health and industrial sectors that may make it more attractive to an investor. Also bear in mind gold is trading at about 42 times the value of silver where traditionally this figure has been in the region of only 15 times. So some argue that silver has a long way to climb.

The Swiss franc has also benefited from the unrest as it is also seen as a safe haven for wealth.

But when trading in commodities remember that timing is everything as there are no dividends to reinvest. I would not want to put my shirt on the timings of gold prices shown in the following graph. 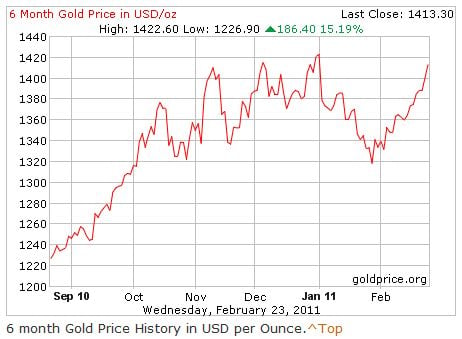 The true cost of a good night's sleep in London