Michael Hewson takes a market-wide look at the major oil companies round the world and analyses the impact sliding oil prices will have on their revenues and dividends as we enter reporting season.

Within the report Michael Hewson discusses:

· Market expectations for major oil companies, with investors looking at whether the slide in oil price has compromised company dividends going forward

Given the headwinds being felt by major oil companies around the world, the share price performance since the beginning of last year, while uninspiring, has still out performed the oil price which given the macro economic back drop is all the more surprising.

In the last 12 months the oil majors have had to deal with  western government sanctions on Russia following events in Ukraine and the Crimea, and the effects these actions have had on the profitability of their assets based there.

Notwithstanding those concerns, the past 12 months have been troubling for oil companies as falling oil and gas prices have put downward pressure on margins, at a time when the companies have for the most part, been looking to streamline their operations.

We’ve already seen the effects that the slump in the oil price is having on the oilfield service providers in the US, with both Baker Hughes and Halliburton announcing job losses as the companies see rig counts drop, and margins decline. We’ve also seen WBH Energy, a Texas based shale producer file for bankruptcy.

This time last year Royal Dutch Shell CEO, Ben Van Buerden, announced a significant sharper focus on cost and unnecessary capital expenditure by introducing a 20% reduction in spending in its US operations, while scrapping further expenditure to drill for oil in Alaska. The company also sold a number of LNG assets in Australia as it warned on profits for the first time in a decade, and recently cancelled a $6.5bn petrochemical project in Qatar as a result of the recent weakness in oil and gas prices.

Given the problems being experienced by its troubled sector peer, BP, the last five years should have been the ideal opportunity for the company to take advantage as its rival wrestled with the fall out of the Gulf of Mexico oil spill on the Deepwater Horizon rig. It is still dealing with the legacy from this and will likely hang over it for quite some time, and is still to some extent causing fluctuations in the share price even now. 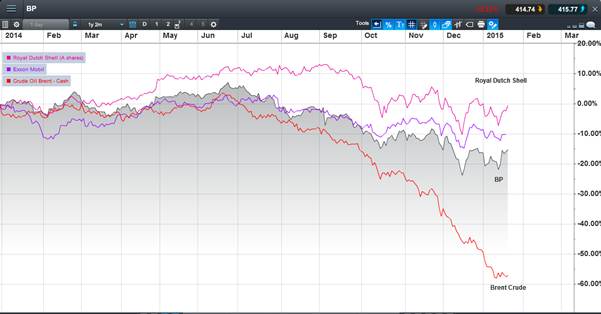 These legacy items continue to weigh on the share price but there does appear to be evidence that the company could be past the worst with respect to that, with a slightly lower fine from the Gulf of Mexico oil spill, though its problems in Russia are continuing to give management headaches. Having successfully offloaded its stake in TNK, it took on a whole set of other problems when it partnered up with Rosneft, just before Russia decided to become the pariah of the western world when it decided to destabilise Ukraine and push in to the Crimea region.

The slide in the rouble as a result of the sanctions, as well as the oil price, could well equate to a particularly sharp drop in its revenues for the fourth quarter, and has raised some concerns in some quarters about the sustainability of the company’s dividend, which currently yields just over 5%. These concerns seem overstated given the dividend cover sits at a fairly healthy 3.3, and the company is more likely to cut costs first then start a share price slide, a fact the company alluded to in December when Bob Dudley suggested the company would “pare or re-phase” around $1bn of cap-ex over the next few quarters in accordance with market conditions.

US giant Exxon Mobil one of the world’s biggest companies has also been hit by the slide in the oil price and like its peers, also has exposure to Russian assets, but due to its size and diversity has managed to also find itself somewhat insulated by the slide in oil prices. This doesn’t mean that it won’t have to make some difficult decisions going forward if oil prices remain low.

Like its peers, the company is looking to the growing LNG space to help offset the decline in its oil production businesses. It recently announced a new gas deal in Papua New Guinea, while it also recently started production at its third Sakhalin oil field which it runs alongside Rosneft affiliates.

Given these price pressures, investors and markets will be looking quite closely at the hit to revenue margins and profits that these factors have had over the last 12 months and whether they predicate any pressure on company dividend policy going forward, particularly given that BP and Shell are big contributors to UK pension funds in terms of dividends.

Ferrari – The World’s Most Powerful Brand