The 2012 Olympic closing ceremony in London was a sad yet accurate reflection of UK's vacuous modern culture that showed the world exactly how naff we are.
But the sad thing is many people enjoyed it and that is because Britain is a dumbed down society that has a thin veneer of culture; yet scratch the surface and you find aÂ gapingÂ cavern with a few rich people who cream the top off the British music industry, which has no interest in or basic understanding of creativity.

Music is just one of the arts that has been dumbed down to the point where 98% of the population now believe they are music critics just because theyÂ perceiveÂ theÂ postulations of a talent show judge who has no actual talent in their own right.

And it was at the Closing Ceremony of the 2012 Olympic Games that Britain showed the rest of the world what modern British culture is made of.

And I have to say the David Arnold and Kim Gavin absolutely nailed what our culture is about.

A mish-mash of past glories repackaged for the global audience does not portray Britain in a brave or bold artistic light, in fact it does the exact opposite.

Of course Britain has produced some of the world's greatest musicians and songwriters, but in recent years the new talent has been strangled by talent shows which are judged by those who should not judge and then locked out by the music industry, which goes for short termÂ financialÂ gains and does not seek norÂ applaudÂ the nextÂ paradigm shifter.

The young, raw talent like that which theÂ Beatles, Rolling Stones, Kate Bush, Pink FloydÂ had is there to be foundÂ acrossÂ Britain but it has nothing to do with the mainstream British culture and is not funded or commerciallyÂ successful.

Britain has turned its back on itsÂ trulyÂ talentedÂ young people and the young are forced to please a crowd that grows less appreciative of quality music by the day.

Okay there were a few highlights to the show and they are as follows:

1. Pink Floyd's drummer Nick Mason being moreÂ entertainingÂ playing a steady beat than the combined effort's of the Spice Girls.

3. Roger Daltrey waving his arms before the bass and piano stabs at the start of their performance then going on to sing a blinder.

4. One DirectionÂ successfully lowering the IQ of the global audience 3 points just by singing.

5.Â Â Fat Boy Slim revealing to the world the more technical nuances of being a DJ by choosing when to press start on the next track right at the opportune pre-rehearsed moment as the last trackÂ finishes.

6.Â Timothy Spall doing probably the worst impression of Hitchcock I have ever seen (yes I know who it really was).

Let's face it, the sad thing is Danny Boyle did have some moments of creative genius during the OlympicÂ OpeningÂ Ceremony and he did manage to cut a fine line between artistic, allowing the British to laugh at themselves whilst giving the world key points that they could recognise.

The accompanying dance toÂ Emeli Sande performing Abide with Me was breathtaking and that should have been the artistic bench mark for the closing ceremony.

But how could we expect such a high level of artistic expression to be appreciated by a public that has been conditioned to want the cheapest bread and most dumbed down circuses? 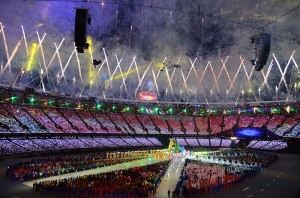 Is the ‘gig economy’ the next challenge for traditional lending?