It was hoped that the Olympics 2012 'feelgood' factor would entice us all to open our purses and wallets letting a little sunlight in a bit more cash out.

But it seems that people were far more content to soak up the Olympic atmosphere from their armchairs rather than by wandering around the shops and spending.

The latest figures from the British Retail Consortium (BRC), which represents about 60% of retailers, showed that like-for-like retail sales fell in August by 0.4% compared to August 2011.

Although general food and party food and drink sales were up a bit the sales of larger items were really weak.

And in a general reversal of what you would normally think, it was London that dragged down the overall picture with the rest of the country coming to the rescue. So the Olympics could well have hurt sales rather than having a positive or neutral effect. And even online sales growth was muted and at its lowest of 4.8% since data collection started in 2008. 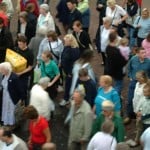 "Hot weather and the Olympics did help sales of party food and drink but that was more than offset by a really weak performance for non-food goods.

"It's clear people were absorbed by the magnificent Olympics and had little interest in shopping, especially for major items. Usually-reliable online sales suffered, putting in the worst sales growth since we started the measure four years ago. Some retailers told us online activity was particularly thin in the evenings. If people weren't watching television they were more likely to be following the sport on PCs and mobile devices than shopping."

There is now the hope that the money not spent by shoppers in August will come out of their pockets in the run-up to Christmas to help salvage the position.