One year after the London 2012 Olympics, a new poll reveals that 75% of Britons believe London was right to have bid to host the Games. This is up from 44% who were in favour of the Games in a poll conducted in 2011, a year before the Olympics.

Today, 45% of British adults say the Olympics ‘were good for people like me’, while in July 2011, before the Olympics began, only 17% thought they would be. The number of people who today say that the Olympics was good for London generally has increased by nearly 20 percentage points from a poll taken just before the Games (58% in July 2012, to 76% today).

Today 58% of Britons believe London 2012 has had a positive impact on Britain’s economy, up from 52% in a poll taken just after the Olympics.

However, while 80% agree that the Olympics was ‘a success’, a majority (55%) of the public today say they are ‘disappointed’ with the way tickets were sold for London 2012.

A plurality (47%) agrees that London 2012 has encouraged people to live more active lifestyles, while 30% disagree and 23% aren’t sure. The percentage who agrees is down from 56% in a poll taken immediately following the Games. 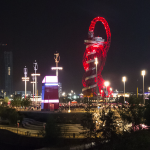 The Orbit at night by Simon Q via Wikimedia Commons

A majority (53%) say that the capital has much better sports facilities, not just for the Games but for years after, however this is down somewhat from 61% who thought this immediately following the Olympics.

YouGov Director of Political and Social Research Joe Twyman said: “A year on from London’s successful hosting of the Olympic and Paralympic Games, it is clear that they remain very fondly remembered by the British public. However, the question of legacy, epitomised by the Games’ slogan ‘Inspire a Generation’, remains a difficult one to square. Our results suggest the foundations may be in place, but a lot of work clearly still needs to be done if the organisers are to deliver on their promises.”