On The Radar: The Top 20 Most Viewed Investment Companies in Q1

User data from the Association of Investment Companies (AIC) website, www.theaic.co.uk is a good reflection on which companies and sectors have been interesting investors in the all-important first quarter of the year. So who's been in the top 20 in Q1?

Murray International, a Global Equity Income company, and Scottish Mortgage, in the Global sector, remain the first and second most viewed companies on the site in Q1 for the second year running, reflecting the sustained popularity of these companies and the popularity of both the income and global sectors.

Other investment companies in the top twenty representing the Global sector include RIT Capital Partners, the fifth most viewed company profile, and Alliance Trust, the sixth, and both of these companies appeared amongst the twenty most viewed companies for the same period last year.

It is also interesting to see Foreign & Colonial and Witan Investment Trust make the top 20 most viewed companies this year (neither featured in the top 20 in Q1 2013), highlighting the attraction of these large, diversified, retail dominated investment companies.

After a torrid time for the Sector Specialist: Commodities and Natural Resources sector, it is also noteworthy to see BlackRock World Mining, which has experienced a rerating since it increased its emphasis on yield, and BlackRock Commodities Income make the top 20 most viewed companies this year (neither featured last year). Other new entrants to the top 20 this year include Perpetual Income & Growth, perhaps reflecting its attractive yield and strong performance (and manager, Mark Barnett's higher profile at Invesco). Other new additions to the top 20 include: Templeton Emerging Markets, Henderson Far East Income and Henderson Smaller Companies.

Many of the 20 featured companies are in the UK Equity Income sector, and it's thought-provoking to see that Finsbury Growth & Income has moved up the rankings to become the third most viewed AIC member in Q1 2014 from 7th place in Q1 2013. Edinburgh Investment Trust remains firmly in the top 10 in Q1.

The AIC's new look website launched in March 2013, and a number of new features were made available. The Find and compare feature allows users to search investment companies by name, sector or management group, and rank them by performance, dividend yield and ongoing charge, as well as discount, premium and gearing. The Watchlist [1] allows investors to bookmark investment companies of interest and compare them later, while the Guide to investment companies and Glossary section provide the information investors might need to know about the closed-ended sector. Many terms in the glossary are explained in an engaging video format. 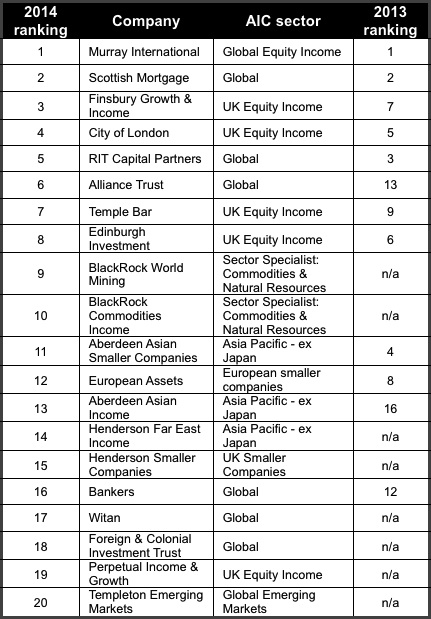 What are the political parties saying about telecoms/broadband/5G?