One Angel Square Scoops RICS Project Of The Year

RICS has today named Manchester's One Angel Square as Project of the Year at the RICS Awards Grand Final held at the Savoy Hotel in London.

In the best ever year for entries, more than 600 building projects entered the RICS Awards which celebrate the built and natural environment. Host Katie Derham of the BBC hosted the event which also saw category awards presented for building conservation, community benefit, design and innovation, and regeneration.

The overall winning project – a £100 million new headquarters for The Co-operative Group – is the largest commercial office building in Manchester and has also achieved the highest scoring BREEAM 'outstanding' office rating in the country, setting a new national benchmark in sustainable design in the commercial sector.

RICS judges said every aspect of the building has been constructed with sustainability at heart, with leading technologies utilised throughout, including underground earth tubes that provide an amount of free heating and cooling. Powered by a pure plant oil-fed combined heat and power system, the building also uses rapeseed oil grown on the Co-operative Group's own farmland.

"Hats off to all those involved in One Angel Square for putting forward such a compelling entry. The quality of the development speaks for itself. As the first BREEAM 'outstanding' regional office building in the UK, it goes to show that sustainability, cutting-edge design and architectural appeal can go hand-in-hand.

"The RICS Awards are testament to the professionalism and skill that lies at the heart of all the professions operating across the built environment, and it's extremely encouraging to see quite so many entries. The benchmark was set extremely high by the shortlisted projects and they're shining examples of the positive contribution development or renovation can make to wider society." 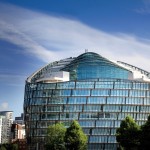 1 Angel Square and the other successful 2013 projects join an elite group of past winners including St Paul's Cathedral, St Pancras station in London, Spinnaker Tower in Portsmouth, the Eden Project in Cornwall and the site of the 2000 Olympic Games in Sydney.