While Valentine's Day may be celebrated in similar ways across European countries, new research highlights differences in attitudes when it comes to couples talking about money.

The study, based on the spending habits of more than 12,500 consumers across 13 European countries asked people how honest they are willing to be with their partner when it comes to their personal finances.

The French are most likely to find financial secrecy normal, according to the latest ING International Survey on Savings, with 42% content to hide information about their finances. At the opposite end of the scale, only 13% of Dutch consumers are comfortable keeping money secrets, which suggests that talking openly about financial affairs is more commonplace in the Netherlands. The UK also ranks quite highly when it comes to being financially secretive with 37% content to hide information about money from a partner. Significantly more than the European average (31%), this figure may indicate that Brits have a less open approach to money compared to their continental neighbours.

For those in a relationship, being in debt is a particularly sore point, with almost one in seven across the continent willing to hide some form of debt from their loved one. The Turkish are most likely to conceal debts (31%), followed by Romanians (22%) and people in Poland (14%). Once again, the Dutch are more transparent with just 2% having debt they don't want their partner to know about. In fact, the research revealed that Dutch consumers are frequently among the most open and honest when it comes to discussing financial affairs.

The research also unearthed the phenomenon of 'secret spenders', with one in five (19%) European consumers admitting to hiding a purchase from their partner during the last 12 months. Romanian consumers are the biggest secret spenders (31%), followed by consumers in Turkey and the Czech Republic. A quarter (23%) of Brits hide purchases whereas very few (7%) Dutch couples partake in secret shopping.

But it's not just spending and savings habits that partners are in the dark about as the research went on to reveal that more than one in 10 (13%) European couples don't know how much money their partner earns. This is true for almost one in five couples in the UK, Romania, Turkey and the Czech Republic. This may reflect the differing attitudes and taboos across the continent when it comes to talking about one's salary, with more Spanish couples being aware of how much their partner earns than any other nationality.

"Many factors could influence how open couples are about their finances. Our research suggests that the majority of people are quite comfortable talking to their partners about how much they spend, save and earn, but around one in three admit to hiding some information.

"Discussing earnings or debt can be a sensitive matter for some. However, the support of those closest to home can be invaluable when it comes to managing money, meaning any surprises revealed this Valentine's Day will be pleasant ones." 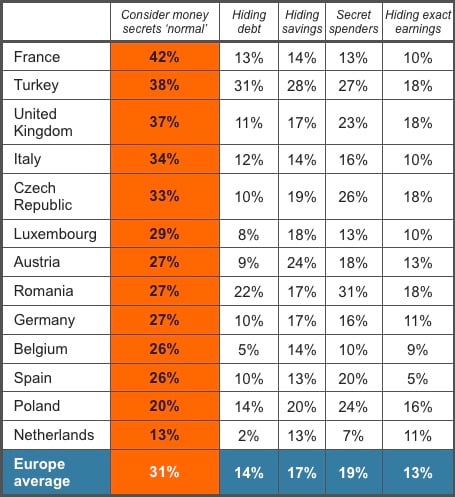 Traditional Christmas is back on the agenda