One year on from the infamous 2012 Budget and the early spring market is showing a healthy picture for PLC, according to HM Land Registry All Transaction Data (ATD). Prices here rose 25% across the year to reach an average of Â£1,186,817. Staggeringly, this price increase is equivalent to earning Â£122 an hour for a working week, 14 times the London Living Wage (Â£8.55).

Two years down the line from the 2011 Budget, headline results show a complete recovery from the rise in Stamp Duty from 4% to 5% for purchases above Â£1m. The bunching in sales under Â£1m, which occurred following the 2011 SDLT increases, has now burst through and the Â£1m – Â£2m price band has seen a staggering increase in transactions of 84% since last March. Furthermore, the number of transactions in the most susceptible sector (Â£1m – Â£1.5m) is finally back to where it stood in March 2011: 87 this month versus 88 in 2011.

The Chancellor increased SDLT for purchases above Â£2m to 7% for individuals buying in their own name and 15% if buying through a corporate vehicle. An Annual Tax on Enveloped Dwellings (ATED) and a CGT were also introduced for company purchases. As a direct result of these changes, 2012 was a rocky year for properties between Â£2m – Â£5m. However, transactions have now made a comeback, witnessing an 8% increase in sales volumes since last year’s Budget. Whilst two years represents the usual time scale for sales activity to recover from tax hikes, London’s ‘safe haven’ status, coupled with weakening sterling, has prompted investors to return more quickly to the market.

“As investors have come to terms with the increased cost of moving, we are witnessing increased sales volumes at the top-end of the market. Whilst these figures are a result of PLC’s continued global appeal, they also represent a bounce back from the reduction caused by property tax rises. Transactions in PLC should continue to pick up across the year once the last of the negative sentiment washes through and when tax carve-outs, announced in the Autumn Statement, come into force at Royal Assent of the Bill in July” comments Naomi Heaton, CEO of London Central Portfolio. 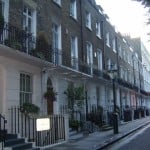 However, an element of both the price and transactional growth is undoubtedly due to a change in dynamics in the super prime market. Some buyers of the most expensive properties are now choosing to avoid Osborne’s new property taxes by purchasing units in their own names – rather than in and existing corporate structure. These transactions are now being lodged in HM Land Registry’s ATD where they did not appear before. Without this behavioural change, it is unlikely that we would have seen this month’s most expensive transaction entered at the registry: One Hyde Park; Flat A 06.1, for Â£29,350,000.

The country as a whole has also seen increasing prices, influenced by a more positive sentiment in the housing market. According to Zoopla Property Group, confidence in the property market is at its highest level in three years. Prices rose 5% across the year to reach Â£234,962 or, taking out the halo effect of PLC price appreciation, the average now stands at Â£224,737.

Whilst London’s most famous new development of the Noughties saw the most expensive transaction, the cheapest purchase this month was Â£8,000 for a terraced house on Blaenau Gwent’s Beaufort Rise. A difference of Â£29,342,000 between the top and bottom end of the market.

Investors urged to be ‘Fed-ready’ ahead of December announcement