Online Drives Over Half Of Non-Food Sales Growth

• Online sales of non-food products in the UK grew 16.0% in November versus a year earlier. In November 2012, they had increased by 7.5% over the previous year.

• In November, online sales represented 19.9% of total non-food sales of our monitor, a record proportion selling online. Excluding online sales, Other Non-Food would have shown a decline in November.

• November online growth was the best this year and, excluding December months, the best in three years.

"We said last month more of us will be clicking into Christmas than ever before this year, and November fuels that trend further, setting new records both for growth and penetration of non-food sales. November's growth rate is the best so far this year and the best in three years if you exclude the months of December.

"The proportion of goods bought online increased across all categories during the month, with clothing having a particularly strong showing. The signs are that many of us went online during the month to make an early start on our present shopping, and the Cyber Monday effect is likely to continue that trend into December.

"Faster delivery times and the growing popularity of Click & Collect means customers are ready to leave ordering online closer to Christmas with the confidence that their goods will still arrive on time.

"Nonetheless, these figures highlight that, while online may have come of age last Christmas, this year it's cementing its position as a popular choice at all stages of the customer journey."

"Retailers' digital channels have proved to be a major pillar of their sales strategy this year, with one in five products bought online this Christmas. It is a sobering thought that without the online transactions buoying them up, Other Non-Food sales would have actually fallen on the previous year's levels.

"Online sales will continue to soar in the run up to Christmas, reaching record heights in December, with transactions spiking on Mega Monday when the last day for guaranteed delivery before Christmas falls due.

"With multi-channel retailing now firmly established, what lies ahead for the retailer is considerable investment in digital analytics and logistics to improve personalisation and meet the increasing demands of the consumer."

Online sales of non-food products grew 16.0% in November. Notwithstanding a relatively weak comparative of 7.5% last year, this was the fastest growth registered this year. If we exclude the December months, which have always been the strongest for online, this was the fastest growth over the last three years. Over the past three months, online sales contributed over half of the growth of non-food sales.

All categories delivered positive gains. While Other Non-Food continued to contribute as much as in October, most other categories improved their contribution, notably fashion, with Clothing coming second in the rankings.

The penetration rate set a new record at 19.9%, meaning that one in every five pounds of non-food buying was made online. The Health & Beauty penetration rate stepped up from earlier months, which could be a sign that Christmas shoppers have made a head start online, looking for the best deal on fragrances and beauty appliances.

As payday coinciding with Cyber Monday is likely to kick-start the December period, there should be more than ever spent Online this Christmas.

Online sales for Clothing enjoyed their best growth since July, across all segments, bringing the category to second position in terms of its growth and contribution. This echoed a good performance in stores, fuelled by pent-up demand from prior months, as the weather turned colder. The penetration rate continued to edge up to a new record of 24.6%, almost three percentage points above last year's level. It must be pointed out that the accounting treatment of online returns to stores differs among multi-retailers.

Online sales of Footwear also accelerated significantly versus October, as they did in store, thanks to the colder weather and to mid-season sales. The contribution of the category increased in a similar manner, making Footwear the third largest contributor last month. At 29.3%, the footwear penetration rate increased over last year but was lower than in October.

Online growth in Health and Beauty picked up from last month, continuing to show the fastest rate of growth across all categories. However, growth is from a low base and the online contribution was second from last. The Health & Beauty penetration rate stepped up from earlier months, reaching a record 6.0%. This could be a sign that Christmas shoppers have made a head start online, looking for the best deals on fragrances and beauty appliances.

Homewares performed strongly in November, improving significantly over the previous month, in terms of growth and contribution. Retailers registered good demand for seasonal items. At 18.8%, the category recorded its highest ever penetration rate, beating its previous record of 18.7% in January.

Furniture & Flooring continued to experience growth online last month but at a slower pace than in stores. It was the only category to record lower online growth in November than in October. The penetration rate was almost unchanged, at 32.1% versus 31.9% a year ago. Retailers commented that demand for dining and living furniture has improved, a sign that customers are feeling more confident to invest into their homes beyond the strict necessities with some purchases inspired by Christmas gatherings.

After a bumper October, Other Non-Food continued to benefit from strong demand online in November, despite falling to third position in the rankings. The category continued to contribute as much as in October, but only represented about half of the total, as most other categories increased their contributions. Its penetration rate jumped to 15.5% from 13.2% last November. In fact, excluding online sales, total Other Non-Food sales would have shown a decline. As some customers may have held their purchases to benefit from the cyber-deals widely advertised for the first week of the December period, the category looks set for a good online Christmas. 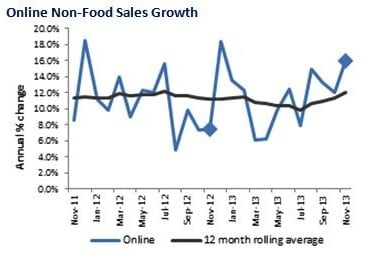 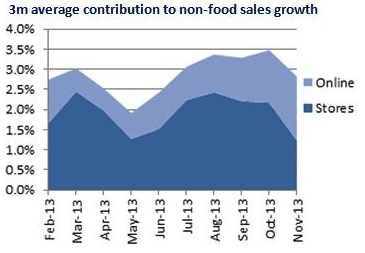 Vodafone Recommended as a Buy