Sound the bull horns, folks! Stocks are sizzling on the chart, and Wall Street is partying like there’s no tomorrow. Kind of sounds like late 1999/early 2000, doesn’t it? And we all know what happened when the party ended then, with the NASDAQ having surged to a ridiculous 5,132 and subsequently crashing.

On Monday, the S&P 500 broke 1,600 and the Dow Jones Industrial Average invaded 16,000 for the first time. There have been five new records broken over the past six sessions. And while the NASDAQ is still eyeing 4,000, there will likely be a move soon.

With about 30 trading days remaining in the year, stocks appear to be heading higher.

While the creation of stock market wealth is fantastic for market participants, I’m growing more wary with each record and feel the stock market is vulnerable to selling.

As I have commented on numerous occasions, you can thank the Federal Reserve and central bankers around the world for the stock market advance.

And with the dovish Janet Yellen expected to be approved as the next Chair of the Fed, the easy money will likely linger going forward.

The buying in the stock market will likely continue to be driven by expectations that the Fed will maintain its bond buying until at least the first quarter of 2014 and low interest rates for a few years.

The obvious reaction to the new records is the reference to a bubble. Now, while I don’t think the stock market will crash like it did in early 2000 (that was not fun to watch), I continue to believe the S&P 500 and Dow Jones Industrial are vulnerable to a stock market correction. 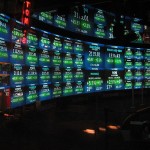 My previous discussion on the initial public offering (IPO) market indicates there is clearly some froth. In the previous week, Zulily, Inc. (NASDAQ/ZU), an online retailer of women’s and kids’ clothing, surged over 70% in its IPO debut. The jump was staggering, especially as it values the company, which has only $567 million in sales over the trailing 12 months ended September 29, at around $4.5 billion. At nearly eight times its sales, Zulily’s valuation is ridiculous, and I would not be surprised to see a correction.

The market action in the IPO stock market clearly points to overheated buying and suggests there could be some selling on the horizon.

The reality is that the fact that stocks continue to edge higher is amazing. It appears the market is just happy not to see downward revisions and accepting average results.

But with the advance, the stock market is vulnerable to selling on any major negative news.

Now, as we approach the key Black Friday on November 29, the focus over the next few weeks will be on the retail sector. But it could be a sad holiday season and an ugly showing.

At this point, I suggest you continue to ride the gains and don’t fight the tape, as the market appears to be heading higher. However, at the same time, consider taking some profits and having some put options in place as a hedge.