David Cameron's promise of an in/out referendum on Europe will probably be held on the 32nd of October 2034 with the result called by a flying pig.

Before the last election Cameron promised a "Cast iron guarantee" that there would be a referendum on the EU, so to backtrack on suchÂ terminology should give the British electorate an idea of the calibre of man they are dealing with.

Of course there will be no referendum because by 2017 (the proposed deadline for such a referendum) Europe will almost certainly be headed straightÂ towards full blown member state federalism provided that they have not actually embarked on political union by that time.

The next couple of months will see if the Tory vote is affected by this last ditch attempt by Cameron to stop haemorrhagingÂ voters to UKIP but I would say that it will probablyÂ galvanizeÂ Farage's support seeing as trust in Cameron's token offering is already being pulled apart by political pundits and rightly so.

But trust in the PM over Europe or rather the lack of it is the very reason UKIP has overtaken the Lib Dems and taken such a chunk of the Tory (and Labour) vote.

And does anyone actually think that the Lib Dems will enter a coalition with such a political mandate thatÂ opposesÂ one of the Lib Dem core values or that the Conservatives can achieve an outright majority in the next election?

Nick Clegg has himself come out today and stated his opposition to an in/out referendum so this is a gamble on the part of the Conservatives to win the 2015 election with a majority.

Of course the other option in the PM's mind is the Conservative party will enter into a coalition with UKIP but Cameron is counting on UKIP's demise through hisÂ disingenuousÂ promise of aÂ referendum.

In other words what is being presented by the Tories is just the pretence of offering a referendum in the vague hope of courting the public and also to put pressure on EU member states to satisfy the government'sÂ demandsÂ to claw back powers from Brussels. 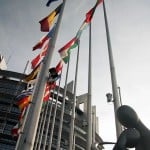 As of today Angela Merkel has said that she is prepared to listen to Britain's demands with reference to its relationship with Europe so one must question Cameron's pledge in light of this, after all renegotiation with Europe might sweeten a future coalition government withÂ theÂ Lib Dems and provide justification for a second U-turn on a referendum if Germany can negotiate an economic deal from Europe on Britain's behalf.

Unfortunately the fact of the matter is when Labour win the next election, following in the footsteps of Tony Blair, David Cameron will need something to shout back at his critics whilst making a fortune touring the University halls of America and Europe by saying 'well, I did offer a referendum in our manifesto'.

The Prime Minister cannot even unite his own party on a referendum and has done more fence sitting over the EU than any other single politician in Europe where as Farage has maintained his position and dignity in the political arena.

Be in no doubt, the PM's pre-election promise can never materialiseÂ into the real world but to even propose an in/out vote goes to show that, because of theÂ magnitudeÂ of the lossÂ ofÂ votes to UKIP, Cameron isÂ desperateÂ to the point of making proposals which threaten to tear the Conservative party in two.

UKIP has much to celebrate today because aside from seeing their demands as a party being met in principle it goes to show exactly who is representing the real threat in the next election.

Commenting on the PM's speech Nigel Farage, UKIP leader, said "What the PM said today has defined the national debate about our place in the European Union. No longer can the case for British withdrawal be confined to the margins. The genie is out of the bottle." and continued "Whilst UKIP, regards todays speech as its greatest achievement to date, the real work for our party has only just begun. The PM has made clear his commitment to the EU Single Market, which will now become the rallying point for the old establishment in this country. Our job will be to point out that argument for the Single Market, is just the same as one used for the Common Market years ago. We will campaign for a trade deal with Europe, to cooperate and to be good neighbours but we do not want membership of a political union."

William Hill believe that there will not be an in/out EU Referendum before 2019, but if there is, the outcome will be a vote in favour if remaining within the EU.

' We offer odds of 8/11 that there will be no such Referendum held before 2019 .' said Hill's spokesman Graham Sharpe.'A few imponderables have to fall into place before Mr Cameron's promised Referendum arrives – not least his own survival as PM – albeit Labour and theÂ Lib Dems could decide to go along with holding a Referendum, themselves. However, assuming the in/out ReferendumÂ does take place by 2019,Â we are 1/3 that it will produce a vote in favour of staying in, and 9/4 that the voters will back withdrawal from the EU. We have also recently taken a number of bets of up to Â£500 a time that David Cameron will not lead the Tories into the next Election and have cut our odds about that happening from 12/1 to 9/1.'

Image by Rama (Own work) [CC-BY-SA-2.0-fr (http://creativecommons.org/licenses/by-sa/2.0/fr/deed.en)], via Wikimedia Commons

The Putin Paradox: How it affects investors